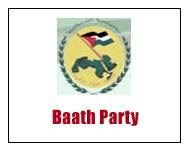 We bring to the attention of our readers this statement of Iraq's Baath Party regarding the agreement reached in Bagdhad between the US and Iranian ambassadors. The publication is for information purposes and does constitute an endorsement of the Baath Party..

"The meeting on the 28 -5- 2007 in between both the US and the Iranian ambassadors in Baghdad must be considered as an official extremely important turning point, never witnessed since the two countries severed relation in 1979, and will bear grave consequences on the future of Iraq and the Arab nation, unless they are met with a resolved Iraqi and Arab stand. In a war of words between the two, and the fueling of artificial crisis in Lebanon and elsewhere, a luring impression was needed, expressed by Khamenei who said that (Iran leads all those who oppose the US in the world) to camouflage and conceal the US - Iranian collaboration in Iraq and in the region and continue with wikedness and ruse, the Iranian role in Iraq, and at the same time, drive a wedge in between anti or pro Iranian Arabs. The meeting, which resulted, according to the Iranian ambassador and his US colleague, at least so far, into a general agreement on the fundamental security' question in Iraq poses two essential questions: Why holding these talks in Baghdad? and what is the importance of these talks on Iraq and the region? Indeed! This meeting is a an official and franc US admission and for the first time that Iran is the US main partner into occupying Iraq since the beginning and until this very moment; and that both US and Iran and regardless of their differences on how to share the booty and the loot in Iraq and in the region, will always agree on Iraq's future and specially in wiping out Iraq's Arab identity..."
Posted by Tony at 7:47 AM