Lebanon, Bush and the Three Stooges 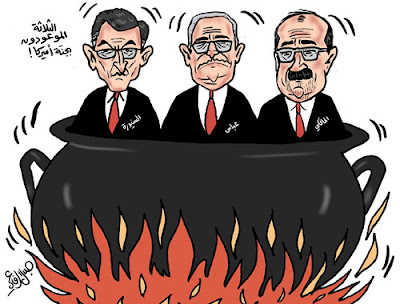 "As the siege of the Nahr al-Barad refugee camp in the northern Lebanese city of Tripoli enters its third week, the last piece of this strange puzzle has finally been put in place. For completing the jigsaw of Tripoli, we have no less than the Bush administration itself to thank, along with the three stooges of Saudi Arabia, Jordan and Egypt.....

So if the well-armed extremists were invited into Lebanon by Siniora and Hariri Inc., why now turn against them? If they were to do their bidding against Hezbollah (their real nemesis; presciently calling on the government to resign for the past several months) what led to the current conflict?

It was by no coincidence that shortly after hostilities began with the unwelcome guests, the United States and their Arab allies did not hesitate an instant to either send or pledge sophisticated weaponry and arms to the Lebanese government in order to combat "al-Qaeda's" presence there.

We should remember that none of these countries lifted a finger to stop the Israeli onslaught of Lebanon last summer by even appealing to the United States to call for a ceasefire. They too wanted Hezbollah destroyed.

So what Israel could not accomplish last year will now be done from within.

In both Lebanon and Iraq, the solution is to foment division among the people in order to ignite a civil war. It is already well under way in Iraq. And if Israel was unable neutralize Hezbollah prior to a US strike against Iran, it appears an attempt to create a similar climate is taking place in Lebanon......

Fouad Siniora, Saad Hariri and Walid Jumblatt, in this most ugly game, have indeed proven the Lebanese government to be one for hire."
Posted by Tony at 8:59 AM