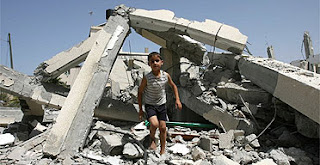 Ian Black in Damascus
Wednesday May 30, 2007
The Guardian

"Khaled Mashal, the influential political leader of the Palestinian Islamist movement Hamas, insists attacks on Israel will continue despite overwhelming Israeli retaliation that has cost scores of lives in the Gaza Strip in the past two weeks.
Speaking in Damascus yesterday he asserted it was the right of the Palestinians to resist "Zionist aggression" regardless of whether their actions were effective.

The continuing siege of the Palestinians would lead to an explosion that would affect the entire Middle East, he predicted.

"Under occupation people don't ask whether their means are effective in hurting the enemy," he told the Guardian in a rare interview at his heavily guarded offices, plastered with images of Jerusalem and "martyrs" killed by the Israelis.

"The occupiers always have the means to hurt the people they control. The Palestinians have only modest means, so they defend themselves however they can."

Hamas has been the main force behind more than 250 qassam rockets fired at southern Israel from Gaza in the past two weeks, killing two civilians. Israeli aircraft have struck dozens of times to curb the attacks, killing some 50 Palestinians.

"The Palestinians are steadfast and there are many ways of resisting according to opportunities and conditions," Mr Mashal said......

"Palestinians have made some mistakes and wrong bets," he admitted. "But negative foreign intervention, especially by the US and Israel, is responsible for these internal conflicts." US financial support and training for Fatah is intended to boost its ability to control security and confront Hamas.

Problems have been compounded by the siege imposed on the Palestinian Authority by the US and EU after Hamas won democratic elections in 2005, Mr Mashal said.

"The siege is collective punishment, and a crime. And the crime is even worse after the Mecca agreement because Palestinians had expected the siege would be lifted.

"Now the international community is trying to undermine Hamas. That will lead to an explosion that will be in the face of the Israeli occupation. The damage will affect the stability of the entire region."

Mr Mashal rejected demands by the Quartet (the US, the EU, the UN and Russia) that Hamas accept three conditions - recognition of Israel, an end to violence and acceptance of previous peace agreements with Israel. These terms had been accepted by Yasser Arafat and Mahmoud Abbas, the Fatah leader and president of the Palestinian Authority, but that had not forced Israel to withdraw.

It was the Palestinians who needed recognition, not Israel, he said. It was a "pretext" to demand the amendment of the Hamas Charter, which says: "Israel will ... remain until Islam eliminates it as it had eliminated its predecessors." The charter calls the whole of Palestine an Islamic trust which cannot be given away to non-Muslims......

To his own people, Mr Mashal is an admired leader, but the Israelis see him as a dangerous terrorist. Ten years ago he was the target of an assassination attempt in Jordan by Mossad agents who injected him with poison. But the operation was exposed and Israel was forced to provide the antidote.

Last week Israel's public security minister, Avi Dichter, warned that he and other Hamas leaders could be targeted wherever they were......

"What caused Sharon to leave Gaza, Barak to leave Lebanon in 2000? And look what's going on in Iraq where the greatest power in the world is facing confusion because of Iraqi resistance. Time is on the side of the Palestinian people. We are right, and our cause is just, despite the appeasement of Israel by most powerful members of the international community.""
Posted by Tony at 4:41 AM