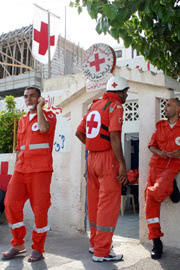 "BEIRUT, 28 May 2007 (IRIN) - Heavy overnight bombardment on Friday of the Nahr al-Bared refugee camp by the Lebanese army killed at least four civilians and injured dozens, with eye-witnesses describing scenes of devastation after the military’s week-long clashes with Islamist militants in the once densely populated camp.

“Nahr al-Bared looks like Leningrad,” Bilal Aslan, a commander in the military wing of the secular Palestinian faction Fatah, who has spent the week inside the camp, told IRIN, referring to the German World War II siege of the Russian city. “The army is not letting anyone in here, so no one can see the massacres they have committed,” he said.

Khaled al-Haj, service officer of Nahr al-Bared for the UN Palestinian relief organisation, UNRWA, who spent the first four days of the siege inside the camp, told IRIN: “We’ve had no electricity, no water and no food. Large areas of the camp are completely destroyed. Nahr al-Bared is a ghost town. The only thing you can smell is death.”.......

Figures from the Palestine Red Crescent (PRC), the only emergency service running ambulances in and out of the camp, at the end of Friday said 84 civilians had been wounded and 35 killed since the bombardment of the camp began on 20 May.......

Over 200 houses in the camp have been totally destroyed, according to Abu Jaber, a community leader working inside the camp, while five mosques have been destroyed by tank and artillery fire. The army said it has been targeting Fatah al-Islam positions. The most recently struck mosque, Al Hawouz near the once bustling central market place of the camp, used to house a temporary clinic set up by the PRC but it was soon abandoned. “The first shell came through the roof. It was dark and dusty and everyone was screaming. My cousin’s eight-month-old daughter fainted from fear,” said Hafida Deeb Wehbe, describing the bombardment that began around 8pm on Friday. “The second and third rounds landed in the street, and then the fourth hit the dome of the mosque and totally destroyed it.”

With none of the camp’s five regular clinics now operating the PRC is setting up two temporary tented clinics, said Dr Abdel Aziz of the Safad PRC-run hospital in neighbouring Beddawi camp. 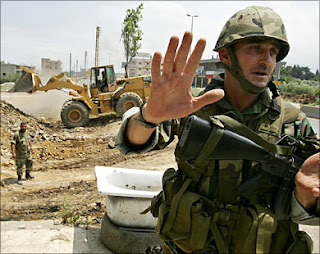 Dr Aziz warned of further casualties if the army makes good on its threat to enter the camp. “If this operation goes ahead we are worried there will be a huge number of civilians hurt,” he said.......

A source in the Ministry of Defence, speaking on condition of anonymity, admitted the army was aware “lots of civilians have died” but repeated an earlier statement insisting the army only targeted suspected Fatah al-Islam positions......"
Posted by Tony at 9:10 AM