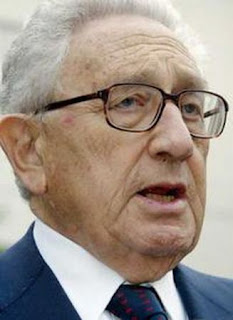 The lessons of Vietnam
Iraq desperately needs a political solution in the short term to make the war more manageable for the next president.

By Henry A. Kissinger
The Los Angeles Times

"......Vietnam and Iraq are different conflicts in different times, but there is an important similarity: A point was reached during the Vietnam War when the domestic debate became so bitter as to preclude rational discussion of hard choices. Administrations of both political parties perceived the survival of South Vietnam as a significant national interest. They were opposed by a protest movement that coalesced behind the conviction that the war reflected an amorality that had to be purged by confrontational methods. This impasse doomed the U.S. effort in Vietnam; it must not be repeated over Iraq......

American disunity was a major element in dashing these hopes. Watergate fatally weakened the Nixon administration through its own mistakes, and the 1974 midterm congressional elections brought to power the most unforgiving of Nixon's opponents, who cut off aid so the agreement couldn't work as planned. The imperatives of domestic debate took precedence over geopolitical necessities.

Two lessons emerge from this account. A strategic design cannot be achieved on a fixed, arbitrary deadline; it must reflect conditions on the ground. But it also must not test the endurance of the American public to a point where the outcome can no longer be sustained by our political process. In Iraq, rapid, unilateral withdrawal would be disastrous. At the same time, a political solution remains imperative.

A political settlement has to be distilled from the partly conflicting, partly overlapping views of the Iraqi parties, Iraq's neighbors and other affected states, based on a conviction that the caldron of Iraq would otherwise overflow and engulf everybody. The essential prerequisite is staying power in the near term. President Bush owes it to his successor to make as much progress toward this goal as possible; not to hand the problem over but to reduce it to more manageable proportions. What we need most is a rebuilding of bipartisanship in both this presidency and in the next."

So, there you have it: The one (war) party system in the name of "bipartisanship." The war criminal is not satisfied with having killed some 3 million Vietnamese; he wants even more Iraqis killed!
Posted by Tony at 12:11 PM