Why Are We in Iraq? 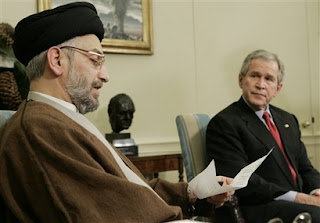 Don't bother examining a folly, advised Ayn Rand – ask yourself only what it accomplishes…

"......This passion for reinvention is also all the rage in Iraq, where the head of the Mahdi Army, Moqtada al-Sadr, has announced what the Voice of America refers to as a "plan to create a more positive face for his movement." Yes, I suppose all those sectarian killings really are bad public relations: the torture and summary execution of Sunnis at the hands of Mahdi Army militants is a major cause of the ongoing Iraqi civil war. That war, however, may no longer be the main problem in Iraq today.

The leading party in Iraq's governing coalition, SCIRI, is also undergoing a makeover, starting with its name: the new moniker is the Supreme Iraqi Islamic Council (SIIC). This is supposed to be symbolic of a metamorphosis that showcases, first of all, the party's recent move away from its traditional patron, the Iranian government. The name change is also meant to put a new emphasis on the religious authority of the mullahs in Najaf, the Vatican of Iraqi Shi'ism, as opposed to that of the Ayatollah Khamenei, headquartered in Iran.

The simplistic and totally wrong explanation we are given in the "mainstream" media is that Sadr is a pawn of Iran, but this has no basis in fact: the real Iranian pawns are SCIRI and its affiliated militia, the Badr Brigade (renamed the Badr Organization, in a lame attempt to apply a thin coat of cosmetic paint to what is otherwise the biggest death squad in Iraq). The former SCIRI, as indicated in its name, was founded to extend Iran's Shi'ite revolution to Iraq. The Iranian government funded and armed SCIRI for many years, and the group's leaders lived in Tehran, where they plotted their return.

What seems to be happening is a complex political balancing act between the Sadrists and SIIC, with the Iranians and the Americans playing off one side against the other. While Sadr has moved closer to the Iranians and SCIRI/SIIC has moved away from Tehran, the underlying ideological dynamics have remained the same, with Sadr vehemently nationalistic and anti-occupation and the relatively moderate pro-government SCIRI/SIIC more amenable to outside interests, such as the Iranians and the Americans. Sadr is against the breakup of Iraq into sectarian-ethnic sectors, while SCIRI/SIIC has endorsed the idea of a Shi'ite confederation of provinces in the southern region of the country – a project in sync with Iranian ambitions to dominate the region.......

This is the background to the Monday meeting of the U.S. and Iranian ambassadors to Iraq: both Washington and Tehran, for different reasons, have an interest in tamping down the Sadrist influence and bolstering the shaky hegemony of SIIC and the United Iraqi Alliance-led government. For all the rhetorical posturing over the nuclear issue and the bombastic denunciations of alleged Iranian "interference" in Iraq – a charge that sounds awfully odd coming from a country that currently has some 160,000 troops occupying the country – the Americans are undoubtedly going to ask the Iranians' help in minimizing the influence of a troublesome antagonist, and Tehran has every reason to cooperate........"
Posted by Tony at 8:20 AM