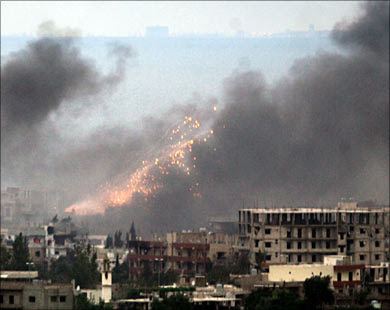 If you have ever seen Palestinian children reverentially holding aloft those ancient keys to the abandoned homes of their parents and grandparents, you would know what I am talking about.

"Lebanon is no stranger to conflicts. Especially those involving the Palestinians. But as my hero Robert Fisk, offering another ringside view of another war in the Middle East says, there is something really ‘obscene’ about watching the ever suffering Palestinians get caught in another war that is not of their making.......

Thousands of Palestinians have escaped with only their clothes on the back. Hundreds of families have been torn apart as they ran for their lives once again in their eventful history.

The fact that most of these families are the survivors of the 1982 Invasion by Israel and the subsequent Sabra and Shatila massacres by Ariel Sharon’s goons only underscores the never-ending tragedy that is the Palestinian existence. How long will the Palestinians have to pay for the crimes that they have not committed?

According to the UN, there are still nearly eight thousand Palestinian refugees trapped inside Nahr Al Bared that was originally home to nearly 40,000 of them, without food and war. Many of the Palestinians fled for safety after an informal ceasefire came into being last week. As I write this, the Lebanese troops have resumed their attack......

Many others suggest that Fatah Al Islam are mere mercenaries who, unbeknownst to them, could be part of a bigger plot to destablise Lebanon and ensnare the already bedevilled Middle East into another conflict. The fact that the US has lost no time in jumping into the fray by rushing ‘military aid’ to the Fouad Siniora government gives credence to the second opinion......

The Palestinian refugees do not exactly live in ideal conditions elsewhere in the Middle East. Poverty, unemployment and other problems that go with them are common everywhere, just as they are in the Occupied Territories. They are seen with suspicion and have little freedom of movement or action, wherever they are.

However, Lebanon is easily the worst of them all for the Palestinians. Living in abject poverty and squalid conditions, they are prisoners in their camps for all intents and purposes. This is not my view but the shared opinion of the UN aid agencies and civil society groups working in the region. The Palestinian refugees in Lebanon have no rights, freedom or dignity, to speak of. As some conscientious UN officials and independent journalists have tried to report, the Palestinians have been caught yet again in a dangerous game of big powers. And they are being meted out collective punishment for what they are. The Western media has already condemned them for ‘supporting Al Qaeda elements.’

If Fatah Al Islam snipers are shooting at Palestinian women and children fleeing Nahr Al Bared, the Lebanese tanks are firing deep inside the refugee camp — ostensibly at Fatah Al Islam terrorists. However, they always end up targeting Palestinian civilians......."
Posted by Tony at 12:40 PM