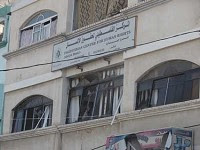 "Gaza - Ma'an - At approximately 23:00 on Saturday, 26 May 2007, an Israeli warplane struck the northern Gaza Strip. According to a press release from the Gaza-based Palestinian Centre for Human Rights, the missile damaged PCHR's branch office in Jabalia, in addition to dozens of civilian homes and shops.

PCHR reports that the missile hit a security room belonging to the Palestinian Ministry of Interior's Executive Force in the centre of the densely populated Jabalia refugee camp in the northern Gaza Strip. When the missile hit the ground, the missile caused heavy damages to PCHR’s Jabalia office, nearly 40 metres away, and to dozens of houses and shops, the press release says. Additionally, 15 Palestinian civilians were wounded by shrapnel according to PCHR.

PCHR condemns such attacks, describing them as "a form of collective punishment against the Palestinian civilian population in violation of article 33 of the Geneva Convention", and calls upon the international community "to immediately intervene to stop such crimes."