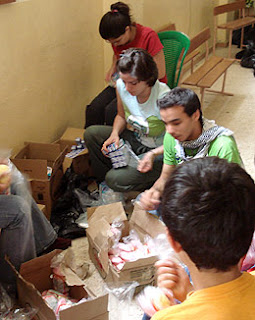 "Today the Lebanese army gave the PLO 72 hours to take out Fatah al-Islam or else the violence will be escalated in the Nahr al-Bared refugee camp. It is not clear if this means that they will enter or if they will use heavier artillery, but I fear that they will raze the camp. This would not be the first time that it has happened. The Dbeyeh refugee camp was destroyed in 1976 during the Civil War in Lebanon when most of the Palestinian refugees living there were killed or forced out.

The shelling in Nahr al-Bared refugee camp has resumed yet again; more Palestinians are trapped inside and many of them seem to be men. Those who fled Nahr al-Bared and arrived in Shatila refugee camp in Beirut are fatherless families. Houses were destroyed and collapsed and people fled the camp, but many could not find their identity cards. Women and children have an easier time passing through checkpoints without these cards, but men cannot.

The aid situation in Nahr al-Bared is by far worse. It's not clear how many people remain inside, but the Lebanese army continues to hinder the access of journalists, ambulances, and humanitarian aid into the camp, although they did allow four trucks to enter today.......

But as we scramble for funds in between our work in the camps we could not help but notice the vast gap between the Palestinian refugees' hospitality last summer during the July War and the current situation. Lebanese who fled the south during the war last summer were welcomed into the Palestinian refugee camps and greeted with "ahlan wa sahlan" (welcome). Yet not one Lebanese church, mosque, school, or home that we know of has yet to do the same in return. Instead I read, hear, and witness increasing hostility towards the Palestinians among a large population of Lebanese. My only hope is that the next two days do not lead to a repeat of Dbeyeh forcing refugees to remain in even worse conditions before in these increasingly overcrowded camps.
Posted by Tony at 4:58 PM