The Shape of Things to Come: Occupation by Other Means 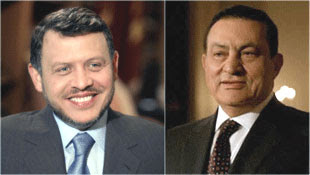 "Israeli-Palestinian fighting in and round the Gaza Strip could end with the deployment of a foreign peacekeeping mission, including troops from Egypt, Pensioner Affairs Minister Rafi Eitan said on Monday.

"The same thing, sooner or later, will happen in the Gaza Strip, with the senior partner in such a force being Egypt because it has no choice," Eitan told Israel Radio.

"And when the Egyptians are there, when 500 or 600 (Palestinian)civilians are killed, no one will say anything," he said. "That is what will eventually happen. We are getting there, gradually."

Israel long resisted the peacekeeper idea. Though it has signalled flexibility on the issue since the Lebanon war, Prime Minister Ehud Olmert's spokeswoman said Eitan's thinking was not that of the government......

European Union foreign policy chief Javier Solana said last week after talks with Israeli and Palestinian officials that a peacekeeping force was "one of many suggestions" that the EU would be "open to consider" if proposed by the parties.

But Solana said Egyptian officials had made clear to him that "they don't see the need for that". The Palestinian government has said peacekeepers were not yet on its agenda.

Western diplomats say they doubt enough European countries would come forward for a peacekeeping force in Gaza, especially if Israel insisted on a sweeping mandate that required the foreign troops to disarm or arrest Palestinian militants.

The diplomats said, however, countries in the region like Jordan, Egypt and Turkey could be candidates.

Eitan said he also anticipated a future Jordanian deployment in the West Bank, which Amman lost to Israel in the Six-Day war."
Posted by Tony at 12:32 PM