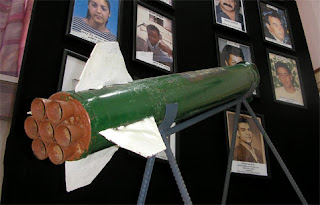 "......The Palestinian rockets may indeed be futile when compared to the superior Israeli military capabilities, but they still cause harm and panic, as stones did before. They are also likely to become more advanced and lethal, otherwise why should the Israeli retaliation be that intense and violent. The life of even one victim of 200 rocket attacks, on the other hand, should be valuable too, although continuing violence and wholesale murder in as many war theatres in the region has got us accustomed to undermining the meaning and the value of human life.

But this also misses the point essentially: if the Palestinians should stop firing because their rockets lack precision and effectiveness, would they be justified using them if, or when, they managed to overcome the shortcomings? And is it, therefore, the flawless efficiency of Israeli weapons that justifies the continuation of their use against Palestinian civilians? Is that a new standard of legality and justice?.....

Any society which would be subjected to a fraction of what the Palestinians have since the catastrophe befell them 60 years ago would react much more violently, and would still be respected, supported and justified. One need not go far to find proof. When Israel destroyed much of the poor Gaza infrastructure, in June 2006, including power supply, water and bridges, in addition to tightening the siege and terrifying the people, it was acting "in self defence", and therefore not blamed by the hypocritical world which regularly condemns Palestinian violence. Israel at the time was retaliating for the capture of an Israeli soldier, Gilad Shalit, who has not been harmed. Few paid any attention to the Palestinian claim that they, by capturing the soldier, were also retaliating for the detention of close to 12,000 Palestinians in Israeli jails, of whom more than 1,500 were children and women. Israel, it seems, owns the exclusive right to retaliate......."
Posted by Tony at 9:42 AM