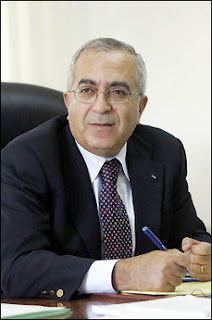 "With US backing, donor funds have started flowing into an account controlled by Palestinian Finance Minister Salam Fayyad to pay partial government salaries, Palestinian and Western officials said on Monday.

Fayyad was expected to receive enough money through the Palestine Liberation Organization (PLO) account to pay government workers, including members of the security forces, at least half of their normal monthly wages later this week.

With the Palestinian unity government paralyzed by infighting, Israeli forces arresting cabinet ministers and workers threatening an open-ended strike, it is unclear what impact the payments will have and how long they will continue......"
Posted by Tony at 10:35 AM