Reporting from the front: Interviews with PLO spokesman in Lebanon and PFLP official (Part 2) 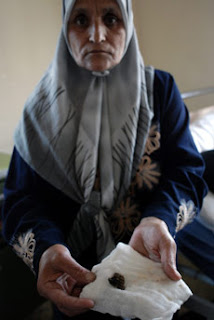 "Interview with Khaled Yamani, PFLP official; Treasurer of the Committee for the Festival of Right of Return (a grouping of 23 civil society organizations) and an organizer of the youth wing:

Q: As a representative of the PFLP, what is your reaction towards the Palestinian leadership's position regarding the shelling of Nahr al-Bared?

A: Honestly, the first day there was sympathy for the soldiers that were killed. But after the shelling started we felt that the targets were not Fatah al-Islam, but rather the Nahr al-Bared camp. I was with a French delegation in Beirut, and five of them were trapped in Nahr al-Bared. I listened to the statements that were issued by the Palestinians, and there were not on the same level as the reaction on the ground. At the end of the day, there is a people that is being shelled and people are dying. Right now I am not concerned with the political issue as much as I am with protecting my people. Honestly, the positions taken should have been clearer. Just as I should say that I sympathize with the soldiers that were killed, it shouldn't have been said as it was today that Nahr al-Bared or any other camp is a red line [referring to Hasan Nasrallah's televised speech of 25 May 2007]. My personal opinion is there should have been a comprehensive mobilization from all the camps and the Palestinian parties should have held the Lebanese authorities responsible for its actions. You are shelling a people, 45,000, not distinguishing between civilians and others. Their reaction was very bad, I'm very disappointed by their reaction, like "Oh, maybe if the army goes into the camp, we'll stand by them". Of course it shouldn't be understood that we are against the Lebanese people or the Lebanese authorities, but there is a situation, there is shelling with 155 mm, there is shelling with canons, there are people dying. We still don't know how many bodies there are under the rubble, but this situation is stretching the limits of our tolerance......

Q: Political in the sense of "solving" the Palestinian issue in Lebanon?

A: We are facing two distinct political projects. There is a project of resistance that is trying to counter the American-Zionist ambitions which is represented in Lebanon, in Iraq, and in Palestine. The other political project is the American-Zionist-Arab [one] that calls for a "peaceful solution and moderation" that is trying to solve our problem because unfortunately we are weak. This project is also represented in Iraq, Palestine, Lebanon, and throughout the Arab world. Now the March 14 movement in Lebanon are turning towards the project they are a part of, in coordination with the Palestinian authorities, maybe with Maliki and Karazai as well. The resistance is made up of Hamas, Jihad, and PFLP in occupied Palestine, with Hizbullah in Lebanon and those in Iraq. There may not be coordination between them, we can't say that we are with the Taliban in Afghanistan, but they are fighting the Americans from their perspective. If they win, it's better for me than if the American project succeeds. There doesn't need to be organizational coordination, but there are common interests......

A: We can talk about that for three hours! The issue is that we also have our own [internal] problems. When I speak of a Lebanese political division I also speak of a Palestinian division. To be honest, the Palestinian people no longer feel that any of the Palestinian factions represent them, not even the PLO. We'd be kidding ourselves if we claimed that. How do they represent the people? We're all living in camps, if a Palestinian [official] were to meet with a Lebanese he wouldn't talk about our real concerns and suffering. They have other concerns now, concerns of power and political standing, Gaza and the West Bank, unfortunately. They're fed up with us and want to unburden themselves of the Palestinian issue in Lebanon, especially that we've become a crisis point for them......."
Posted by Tony at 12:07 PM