The Case for Bombing Iran 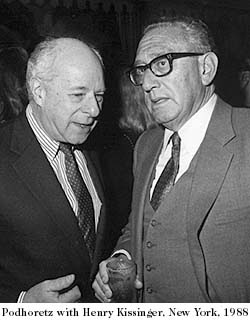 I hope and pray that President Bush will do it.

"......Like the Cold War, as the military historian Eliot Cohen was the first to recognize, the one we are now in has ideological roots, pitting us against Islamofascism, yet another mutation of the totalitarian disease we defeated first in the shape of Nazism and fascism and then in the shape of communism; it is global in scope; it is being fought with a variety of weapons, not all of them military; and it is likely to go on for decades.

What follows from this way of looking at the last five years is that the military campaigns in Afghanistan and Iraq cannot be understood if they are regarded as self-contained wars in their own right. Instead we have to see them as fronts or theaters that have been opened up in the early stages of a protracted global struggle. The same thing is true of Iran......

Not surprisingly, the old American foreign-policy establishment and many others say that these dreams are nothing more than the fantasies of a madman. They also dismiss those who think otherwise as neoconservative alarmists trying to drag this country into another senseless war that is in the interest not of the United States but only of Israel.....

Not so George W. Bush, a man who knows evil when he sees it and who has demonstrated an unfailingly courageous willingness to endure vilification and contumely in setting his face against it. It now remains to be seen whether this president, battered more mercilessly and with less justification than any other in living memory, and weakened politically by the enemies of his policy in the Middle East in general and Iraq in particular, will find it possible to take the only action that can stop Iran from following through on its evil intentions both toward us and toward Israel. As an American and as a Jew, I pray with all my heart that he will."
Posted by Tony at 6:48 PM