Militias act with impunity, despite US troop surge 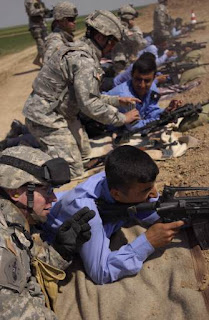 By Patrick Cockburn
The Independent

"The raid on the Finance Ministry in Baghdad by 40 policemen in 19 vehicles who calmly cordoned off the street in front of the building before abducting five Britons shows how little has changed in the Iraqi capital despite US reinforcements and a new security plan.

It has always been absurd to speak of men "dressed in police uniforms travelling in police vehicles" as if they were gunmen in disguise. "Of course they have the uniforms and the vehicles, because they are real policemen," said an Iraqi minister after a similar operation in which 150 people were abducted from the Ministry of Higher Education in the capital last year......

The abductions at the Finance Ministry underline another truth about Iraq. In Arab Iraq, the US and Britain have no allies. For four years the Sunni community has been in rebellion. But the Iraqi Shia only supported the US-led occupation as a means to an end, by which they would legally take power through elections. The Shia do not, at the end of the day, intend to share power with foreign occupiers.

One reason why so many foreign security contractors are employed in Iraq, at vast expense, is that the US, Britain and the Iraqi governments recognise they dare not rely on Iraqis to protect them."
Posted by Tony at 5:16 AM