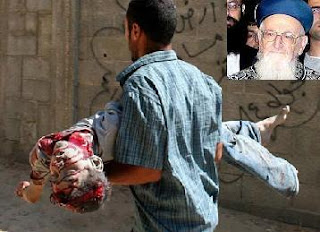 "Shortly before Israeli occupation soldiers in cold blood murdered two Gaza children, who apparently were searching for scrap metal to sell for a few cents in order to help feed their impoverished families, the former Chief rabbi of Israel, Mordechai Elyahu, urged the Israeli army and government to use the "Nazi choice" against Palestinians.

Elyahu reportedly petitioned the Israeli government to carry out a series of carpet bombings of Palestinian population centers in Gaza, arguing that a ground invasion of the world’s most crowded spot would endanger Israeli soldiers.

Mordechai, considered one of the most knowledgeable Talmudic sages in Israel, said it was forbidden to risk the lives of Jews for fear of injuring and killing Palestinian civilians......

This totally racist discourse toward non-Jews represents the mainstream and modus operandi at Merkaz Harav where Talmudic sages such as Haim Druckman, Avraham Shapira, Dov Lior, etc, teach that non-Jews are sub-humans, and ought to be enslaved or destroyed.

Western people, constantly brainwashed with unceasing Zionist propaganda and disinformation about Israeli "democracy" and "liberalism" might be prompted to think that such ideas are marginal, eccentric or even anecdotal and that they are espoused by only a small bunch of Talmudic extremists. But this is not the case at all. Today, this Nazi-like ideology is "manual for action" for hundreds of thousands of Jews around the world, especially in Israel, including the estimated half a million settlers in the West Bank and East Jerusalem who openly claim that non-Jews living under Jewish rule ought to be enslaved, expelled or annihilated......

There is no doubt that the nefarious ideas of Jewish supremacy, as taught by Talmudic circles such as Mirkaz Harav, is poisoning and even nazifying the minds of thousands of Jewish and Israeli youths. Earlier in May, a recent Jewish immigrant from France murdered in cold blood an Arab taxi driver from East Jerusalem after beguiling the unsuspecting victim to take him to Netanya. The murderer, named Julian Sufir, had apparently been subjected to heavy doses of religious indoctrination at a synagogue near his home, which probably preached the message that non-Jews are infra-humans. When this Sufir was interrogated by policy, he so calmly and nonchalantly told them that "I just wanted to kill an Arab, any Arab. There is no difference between killing an Arab and killing an animal. When I killed him, I felt I was slaughtering a sheep.!!".......

This danger is so real and so tangible especially when one considers the fact that tens of thousands of Israeli occupation soldiers happen to be graduates of Talmudic schools, known as Yeshevot. Needless to say, most of these schools teach that killing innocent Arab children is a great mitzvah and makes a Jew closer to God......

I say "when" because the Israeli Jewish society is drifting menacingly to jingoistic religious chauvinism that can be compared with the drifting ideological currents among Germans in the mid and late 1930s. Hence, a takeover of power in Israel by the settler and pro-settler camp is not a matter of "if" but rather "when" it will happen......"
Posted by Tony at 9:17 AM