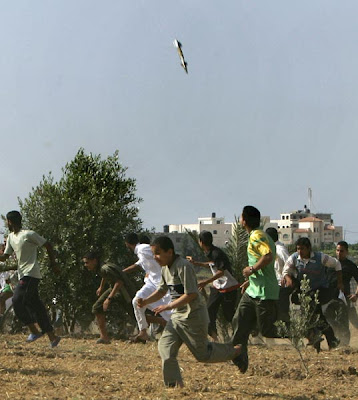 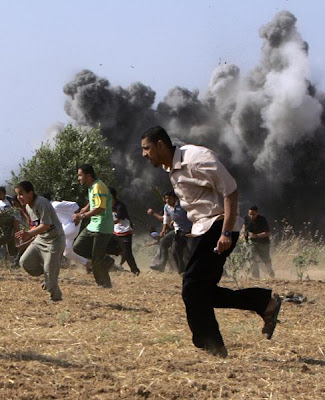 Palestinians run for cover as a missile fired by the Israeli military is seen nearly hitting its target during an air strike on Hamas's Executive Force building in the Nusseirat refugee camp, Gaza; Palestinians following the air strike.

".....Meanwhile, there have been consistent reports describing a tripartite plan by Israel, the US and unidentified regional Arab governments to destroy or at least weaken Hamas for the purpose of facilitating the dismantling of the current Palestinian Authority.

According to the plan, Israel would arrest the vast bulk of the Hamas leadership in the West Bank in order to leave the Hamas rank and file leaderless and off-balance. And in the Gaza Strip, the US would pour money and weapons unto the Dahlan Camp for the purpose of strengthening it against Hamas.

With a weaker and leaderless Hamas, Abbas, the plan envisages, would dissolve the Palestinian national unity government and call for early general elections. These would be widely manipulated by American-Israeli intervention, including a pledge by them to lift the crippling embargo against the Palestinians and pay the outstanding salaries of civil servants.

Elliot Abrams, the apparent mastermind behind the plan, hopes that a sizeable majority of Palestinians would vote for a "moderate" Fatah leadership, which would eventually accept a "reasonable peace settlement" with Israel whereby the Palestinians would give up the right of return, the bulk of East Jerusalem and allow Israel to maintain most, if not all, of the West Bank settlements including Mael Adumim, Ariel, and Pisgat Zeev.

Moreover, the contemplated final settlement would also include a "Palestinian-Israeli agreement" which would allow the Jewish state to maintain an undisclosed number of military bases and early warning stations on major hilltops in the West Bank as well as in the Jordan valley, for at least 30 years.

The agreement would also allow Israel to "rent" certain settlements, such as Kiryat Arbaa near Hebron, for 99 years. However, the Palestinian Authority, denies that anything like this is being discussed.

However, it is abundantly clear that the Bush administration, ostensibly in connivance with the Israeli government, is acting in a way suggesting that a Palestinian agreement, or at least "understanding" has already been reached with the likes of Mohamed Dahlan. Rumour has it that Dahlan is being groomed as a successor to Abbas, a leader the Americans increasingly regard as weak, indecisive and reluctant to confront Hamas.

There is no doubt that such a deal, or a "sell-out" as numerous Palestinians would view it, would be resisted vehemently by the majority of Palestinians including the so-called Arafatists, Hamas and the leftist organisations.

However, the American-Israeli alliance, possibly in concert with regional Arab governments, might seek to devise ways and means to bolster the "peace camp" among Palestinians by way of arguing that the opposition ought to "give peace a chance", respect the "democratic game" and allow the "democratically-elected government" to negotiate a final peace agreement with Israel.

Nevertheless, it is unlikely that such a conspiracy would succeed, due to massive opposition, even if augmented by American money and Israeli carrots, such as allowing Palestinians to obtain food and work relatively easily and unfreezing Palestinian tax revenues.

In 1978, Israel attempted a similar feat when it tried to destroy the PLO leadership by establishing the so-called "Village League" as a replacement. It failed miserably and Israel was forced to abandon the plan."
Posted by Tony at 8:23 PM