Al-Ahram Magazine: Many Fatah leaders are angry with Dahlan 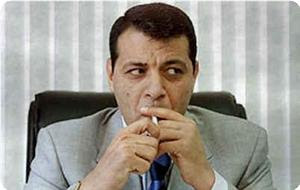 "CAIRO, (PIC)-- An article published by the Cairo based al-Ahram al-Arabi magazine said that many Fatah leaders feel that Muhammad Dahlan has hijacked the movement with the consent of President Mahmoud Abbas.

It was stated in the article that the magazine has surveyed the opinions of a large number of angry Fatah leaders in the West Bank and the Gaza Strip "who felt that Dahaln has hijacked the [Fatah] movement with the consent of President Mahmoud Abbas."

The article also pointed to the fact that many historic leaders of Fatah have taken a back seat since Mahmoud Abbas took over the leadership of the PA after the death of Yassir Arafat allowing Dahlan's trend to gain strength inside the movement and to bypass Fatah's Central Committee and Revolutionary Council through direct support from Abbas.

A member of Fatah's Central Committee told the magazine on condition of anonymity that the committee found itself in a difficult position as did not want to enter into a confrontation with Abbas who overlooks Dahlan's excesses and at the same time they could not criticize him at a time when clashes between Hamas and Dahaln's trend were taking place.

The article also attributes the strength of Dahlan to finance stating that after the death of Arafat, financial support, which used to come from Gulf countries dried up, but Dahlan has been bankrolling the movement since then with funds the sources of which and the agenda behind is not clear.

There are claims that Dahlan has managed by some mysterious power to reopen the tap from Gulf countries and claims that Dahalan is directly supported financially by the USA and even Europe, according to the article.

All these factors, as well as his ability to network with and employ many Fatah cadres, have allowed Dahlan to establish an organization inside Fatah which is answerable to him only and the strength of which parallels that of the mother movement.

A majority inside Fatah's Central Committee voted against the Abbas's proposal to appoint Dahlan to the Committee.

Some members of the Revolutionary Council have been calling for a meeting of the Council, which was supposed to take place on 18 May, to discuss the latest situation in the Palestinian arena blaming Dahlan for the deterioration and for inciting against Hamas which culminated in the armed clashes in Gaza....."
Posted by Tony at 8:31 AM