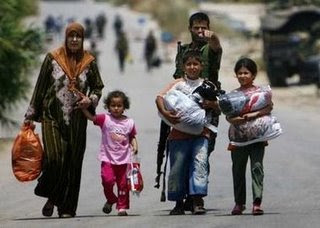 Pack Up and Leave or Stay Home and Die

".....While it is true that the US uses terrorist organizations to further its policy objectives (The US supported Bin Laden in Afghanistan, the KLA in Kosovo, the Mujahedin Klaq in Iran) the situation in Lebanon is a bit more complex.

Fatah al-Islam is comprised of Sunni radicals who were recruited from the other Gulf States to counterbalance Hezbollah. Now, it appears, they have outlived their usefulness and the Lebanese warlords have decided to eliminate them......

The allegations in the western press were merely a pretext for restarting the fighting. The siege of Nahr al-Bared is probably just Phase 2 of Israel's 34 Day War--- a conflict in which "Israel's air force, armed with U.S.-manufactured and -fueled F-16s, went on a rampage with more than 14 combat missions every single hour of the war, destroying, among other things, 73 bridges, 400 miles of roads, 25 gas stations, 900 commercial structures, two hospitals, 350 schools and 15,000 Lebanese homes."

The US-Israeli goals in Lebanon have never really changed. Israel wants a reliable client to its North and access to Lebanon's water supplies. They also want to crush their main enemy, Hezbollah, the Shiite resistance organization which has routed the IDF twice in the last 15 years.

Bush, on the other hand, is trying to destabilize the entire region using the madcap neocon strategy of "creative destruction". He thinks that if he can erase the traditional borders and create a fragmented Middle East, the transnational corporations will be able to control the region's vast resources.

Washington's allies in Beirut like the idea, too. Walid Jumblat, Sa'ad Hariri and Prime Minister Fuad Siniora"all believe that the outbreak of violence will only strengthen them politically.

It's interesting to watch how eager Siniora is to bomb of a defenseless refugee camp, when just months ago he was too afraid to deploy troops to the south of Lebanon to fight the invading Israeli army. Why is that?.....

But there's another reason for the present siege of Nahr al-Bared besides Siniora's newfound courage, that is, NATO wants to clear the area for another military airbase......

The siege of Nahr al-Bared is an attempt "to eliminate people and start anew" by pushing 30 or 40 thousand Palestinians out of their homes and onto the streets so their foreign overlords can "build a stronger fortress". It is a tragedy and the Bush administration has only added to the crime by providing arms and equipment to the Lebanese Army......

The siege of Nahr al-Bared follows a familiar pattern that we have seen in Gaza, Falluja, Tel Afar and Samarra. The camp has been surrounded and cut off, snipers have been positioned on the rooftops, civilian areas have been shelled with impunity, and the bodies of the dead have been left to rot on the streets.

Sound familiar? It should. These are the basic contours of the Bush Doctrine as it is applied to the (remaining) independent states in the Middle East. The options for the victims are always the same: One can either pack up and find shelter in another filthy refugee-hovel or stay home and die. There's no other choice......

Even though they've lost their homes, the Palestinians have raised themselves above the squalor and cruelty of their predicament and shown selflessness and bravery. That's a powerful statement about the affects of culture and national identity.

As the Palestinian poet Mahmud Darwish says in his poem "Passport":

"My nationality resides in the hearts of all the people,
so go ahead and remove my passport!""
Posted by Tony at 10:05 AM