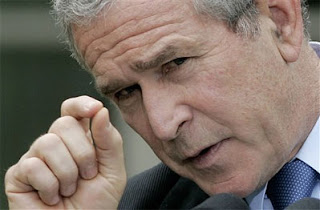 By Scott Ritter
(A long article)

"......But this will not happen of its own volition. The impeachment of President Bush would not in and of itself terminate executive unilateralism. It would only limit its implementation on the most visible periphery, driving its destructive designs back into the shadows of government, away from the public eye, and as such, public accountability. Impeach President Bush, yes, if in fact he can be charged with the commission of acts which meet the constitutional standard for impeachment (and I believe he could, if Congress only had the will to do its job). But to truly heal America, we must repudiate everything President Bush stands for, in terms of not only public and foreign policy, but also in terms of his style of governance, since the former is derived from the latter.

Repudiation is a strong term, defined as “rejecting as having no authority or binding force,” to “cast off or disown,” or to “reject with disapproval or condemnation.” In my opinion, the complete repudiation of the presidency of George W. Bush is the only recourse we have collectively as a people to not only seek redress for the wrongs committed by the Bush administration, but also to purge society of this cancer that threatens to consume and destroy us as a whole, and which would continue to manifest itself in our system of governance even after any impeachment proceedings.

Like any cancerous growth, the Bush administration has attached its malignancy to the American nation in a cruel fashion, its poisonous tentacles stretching deep into our national fabric in a manner that makes difficult the task of culling out the healthy from the diseased. But we cannot truly repudiate something without its complete and utter elimination from our midst. As such, there must be a litmus test to help us differentiate the good from the bad, that which must be restored from that which must be eliminated. For me, there is only one true test: that of constitutionality. There will be those who argue, and have argued, that the time is well past for an oppressed people (and one would be a fool not to comprehend that under the Bush administration, the American people have in fact been oppressed) to rely on the niceties of legal argument, especially when the system of law we seek to use in our defense has been so thoroughly corrupted by those who seek to impose tyranny......"
Posted by Tony at 7:42 AM