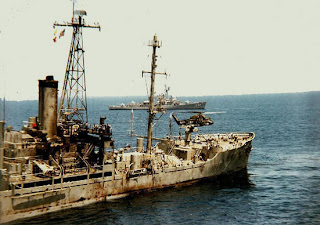 When Israel attacks, the Pentagon retreats

"It was 40 years ago this June 8 that the USS Liberty – a large, armorless, refitted freighter that was gathering intelligence in the Mediterranean at the outset of the Six Day War – was attacked by Israeli fighter jets and torpedoes. Thirty-four U.S. sailors were killed, and 172 were wounded. The Liberty limped back to Malta. A U.S. Navy court of inquiry was on board investigating the damage, but – for some reason – the investigators were not allowed to proceed to Israel to find out what really went on. Orders from the top echelons of the Pentagon nixed the inquiry, and today, the families of the fallen still haven't gotten any answers as to why Israel was allowed to get away with it without even so much as a slap on the wrist – nor even any public acknowledgment that it was a deliberate attack......

Critics may aver that this is all ancient history, that there is no reason to bring up the sinking of the Liberty, and even if it wasn't an accident, it's time to let bygones be bygones. The Lobby constantly asserts that anyone who even mentions this "incident" is nothing but an anti-Semite, because, after all, why talk about it now? The reason is that it underscores the utter falsity of the argument that Israeli and American interests are uniquely and perpetually in perfect alignment. The Israelis attacked the Liberty, according to several books and a BBC documentary on the subject, in order to prevent the U.S. government from learning of Israeli plans to occupy the Golan Heights – a sliver of land that rightfully belongs to Syria, and which is still causing a great many problems for U.S. interests in the region. The stunning fact of the American government's complicity in hiding the truth about an attack on its own soldiers is all we need to know about what's wrong with American foreign policy – and what is the exact source of the problem."
Posted by Tony at 7:28 AM