A GOOD PROGRAM
Posted by Tony at 8:03 AM No comments:


All White Houses leak. Sometimes the leaks are big, sometimes small. But there are always people willing to talk to reporters about the “real” story or about why the chief executive made a mistake in regard to some decision he made.
That said, I've never seen so much leaking so quickly — and with such disdain for the president — as I have in the first six days of Donald Trump's presidency.
Two recent examples:
1. This from the New York Times today on Trump's impulsiveness:

Mr. Trump’s advisers say that his frenzied if admittedly impulsive approach appeals to voters because it shows that he is a man of action. Those complaining about his fixation with fictional voter fraud or crowd counts at his inauguration, in their view, are simply seeking ways to undercut his legitimacy.
Yet some of his own advisers also privately worry about his penchant for picking unnecessary fights and drifting off message. They talk about taking away his telephone or canceling his Twitter account, only to be dismissed by a president intent on keeping his own outlets to the world.

2. This from WaPo on Trump's inauguration crowd estimates:

Trump’s advisers suggested that he could push back in a simple tweet. Thomas J. Barrack Jr., a Trump confidant and the chairman of the Presidential Inaugural Committee, offered to deliver a statement addressing the crowd size.
But Trump was adamant, aides said. Over the objections of his aides and advisers — who urged him to focus on policy and the broader goals of his presidency — the new president issued a decree: He wanted a fiery public response, and he wanted it to come from his press secretary.

Time and again, the image of Trump pushed by his “aides” is one of a clueless child — someone who acts on impulse, disregarding the better advice of people who know better. We know he needs to be managed or else he will say and do stupid things, the message seems to be. We're working on it.
And what we know about Trump from his presidential campaign is that some of his top staffers — most notably Kellyanne Conway — often communicated to the boss via the media. What that strategy suggests is that Trump is influenced at least as much — and, in truth, likely more — by reading the sniping of his aides on background (meaning without their names attached) in the news than he is by private conversations. That the best way to reach him, change his mind or otherwise bend his ear is through a public airing of grievances.
Trump has shown that his tendency to obsessively consume media — especially cable television — is unchanged in the six days since he has become president. He appears to be making policy decisions via things he watches or reads. (Remember Trump's famous/infamous statement thathe got his military information and advice “mostly from the shows.”)
At odds with all of this, however, is the fact that Trump is both deeply proud and hugely image-conscious. Having to read and watch allegedly loyal “aides” casting him as a sort of feckless child constantly in need of guidance wouldn't seem to be the sort of thing that would sit well with him.
Tim Miller, a former spokesman for Jeb(!) Bush's presidential campaign and a frequent Trump critic, summed that sentiment up nicely:
It doesn't take much imagination to conjure up an image of an irate Trump surrounded by the various clips of his aides driving the perception that he badly needs to be managed at every moment. If Trump's entire #brand is centered on being the best/classiest/smartest, these sort of leaks fundamentally undermine that image. And we're only six days into his presidency!
The frequency — and nature — of these leaks are yet another reminder that the Trump presidency is nothing like anything that's come before it. There is no blueprint. We're through the looking glass.
But my educated guess is that these leaks must be driving Trump absolutely crazy. And when he gets mad, history suggests he will try to get even. And quickly.

George Orwell’s tale of doublespeak and Big Brother is flying off the shelf after the president’s inauguration. But other imaginary worlds are closer to reality 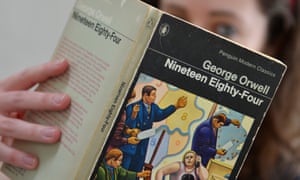 
Since the inauguration of Donald Trump as president of the United States, George Orwell’s Nineteen Eighty-Four has shot up the bestseller charts. The book’s chilling account of a couple’s struggle against a dystopian society has many elements that will strike a contemporary reader as disturbingly prescient. Orwell’s description of “doublespeak” – the ability, and requirement, to utterly believe two contradictory thoughts at the same time – feels tailor-made for a president who simultaneously believes that three to five million “illegals” voted in the election, and that his victory in that election was completely fair and valid.
Similarly, the Party’s slogan that “Who controls the past controls the future: who controls the present controls the past” seems to chime with the White House’s incorrect claim that Trump won the general election with “the most [electoral votes] since any Republican since Reagan” (he didn’t) or that the crowd on 20 January was the “largest audience to ever witness an inauguration” (it wasn’t).
But Nineteen Eighty-Four is also a book about a particular kind of dystopian state: an authoritarian Stalinist future-Britain, based on the fears Orwell felt most pressing in 1948. Maybe it’s time to find better dystopias?

Margaret Atwood’s 1985 novel is set in a near-future New England following the collapse of America into the authoritarian, theocratic state of Gilead. It was groundbreaking for its treatment of gender, depicting a state in which the advances of feminism have been comprehensively destroyed. Women are considered inferior to men, and their every behaviour is tightly controlled by the state. In particular, their role in reproduction is bound to a strict caste system: abortion is illegal, and fertile women are required to bear children for higher-status women.
On Monday, Trump signed the “global gag order”, barring US funding from going to NGOs who provide abortion services or information. It was one of his very first acts as president.

Aldous Huxley’s 1931 novel is often compared to Nineteen Eighty-Four. Where the latter shows a dystopia that rules through fear and repression, Brave New World shows an iron fist in a velvet glove. The population are kept repressed through standard acts of an authoritarian regime, such as control of the media, but also through being kept too happy to rebel. Soma, an antidepressant hallucinogen, is used by almost everyone to tackle any residual unhappiness, while hypnosis ensures that all members of the society’s caste system are happy and content with their place in society.
Compared to Nineteen Eighty-Four, Brave New World makes the case that an oppressive, authoritarian dystopia can still be pleasant to live in for the vast majority, sparking little mass resistance. 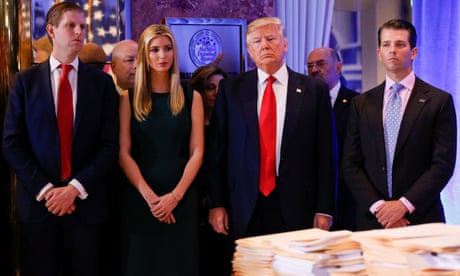 Read more
William Gibson’s novels in the late 80s and early 90s were the defining texts of what has come to be known as cyberpunk. In essence, cyberpunk novels often ask the question: what if we had the technology to solve almost all of the world’s problems, but inequality and capitalism prevent us from doing so? Virtual Light, the first of Gibson’s Bridge trilogy, is set in a sprawling community living on San Francisco’s Bay Bridge following a devastating earthquake. Ever greater concentration of wealth has rendered multinational corporations miniature states in their own right, with private security forces acting like personal armies for the super-rich, while the middle class has almost entirely dissipated.
Trump’s net worth is currently estimated to be about $3.7bn, and he has refused to extricate himself from his businesses in any way that satisfies conventional ethical norms.

Brian K Vaughan and Marcos Martin created the colourful world of The Private Eye in 2015. Set in Los Angeles in the latter half of this century, it explores a world two generations after the “cloud burst”: a catastrophic collapse of internet security that left everyone’s personal data exposed for all to see. To contain the damage, the internet is never rebuilt, and privacy becomes the new focus of society, over liberty or security. But the world still has to deal with its failures to contain the damage of climate change, and the citizens of LA are only safe from the ravages of the ocean thanks to an enormous coastal wall that keeps the waters out.
On Tuesday, Trump moved to freeze contracts and grants funding researchsupported by the environmental protection agency, and a national park became a focus of resistance by tweeting facts about climate change. 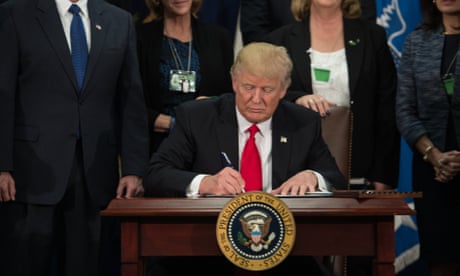 Read more
Alfonso Cuarón’s thriller bears little relation to the PD James novel on which it is based, except for the central premise of a world in which no children have been born for decades. Cuarón shows a Britain ruled by an authoritarian regime, the last functioning government in the world, rousing the public in hatred of “fugees” fleeing the chaos in other nations.
Trump’s signature campaign pledge was to build a wall across the US/Mexican border, and force the Mexican government to pay for it through a threatened tax on remittances.
Posted by Tony at 6:39 AM No comments: 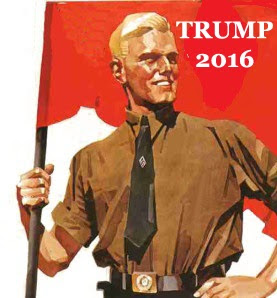