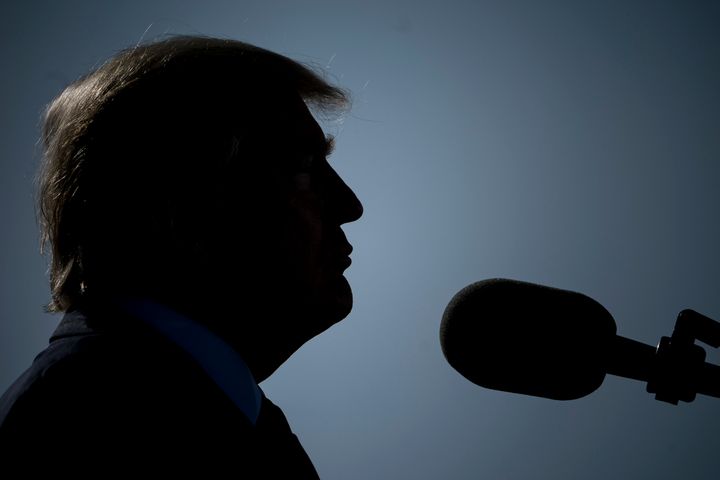 Given its terrible history, the term “fascist” is too often carelessly invoked. But fascism does not presuppose a holocaust. For Americans, the singular presidency of Donald Trump impels a measured consideration of what fascism truly is ― and how it grows. For fascism does not supplant democracy overnight. Rather it advances step-by-step, nourished by denial and disbelief, until it overruns the safeguards protecting decency and freedom.
Is Trump an agent of incipient fascism? Start with its historic cradle ― Europe in the 1920s and ’30s.
True, America’s democratic institutions are deeply rooted. But intelligent Germans and Italians dismissed the bigotry and unreason which overcame them ― their societies were too ancient, too civilized, to yield so easily. Until they did.
How? Both countries nurtured the seeds of democratic decline. Social fissures. Groups that felt beset by inimical forces. Demagogues who promised to subdue those forces in exchange for unquestioning fealty.

Stephen Miller Is Probably Loving This

See all from this author
Particularly instructive is Benjamin Hett’s The Death of Democracy, a penetrating study of how Nazism overtook the Weimar Republic. Hett never mentions Trump; the societal parallels are, of course, far from exact. But his account carries a troubling ― and clearly intentional ― resonance.
Hitler exuded contempt for reason. He recast globalization as a conspiracy. He identified all-purpose external enemies. He cultivated a sense of victimhood. He insisted that the media serve “the general good,” and promised “legal warfare” against critics. He stoked contempt for pluralism and political institutions.
Particularly insidious, he saw Germans as a racial tribe, intellectually unequipped for critical thinking, who craved a leader with mystical powers. Relentlessly he galvanized their anger and anxieties through rudimentary language that was flagrantly mendacious. The greater the lie, Hitler believed, the easier to popularize: “I reduced [our political problems] to the simplest terms. The masses realize this and follow me.”
But Hitler could not rise on rhetoric alone. The German people were profoundly divided by class, region, religion and income inequality. Many despised the cosmopolites, global elites and politicians they associated with democracy. A conservative political and financial class, dismissing Hitler as a showman, imagined they could control him for their own ends ― a tragic miscalculation that resonates beyond its time.
For while fascism slumbered after World War II, it did not die. A contemporary exemplar is Trump’s patron ― Vladimir Putin.
Putin’s regime checks all of fascism’s historic boxes: a cult of personality; nationalism based in paranoia, xenophobia and ethno-religious identity; a tsunami of lies and distortions. Putin portrays a homeland imperiled by enemies ― entitling him to jail or murder domestic dissidents; invade Russia’s neighbors; and undermine Western democracy.
Systematically, Putin has interfered in Western elections and financed right-wing foreign nationalists, principal among them Trump. In The Road To Unfreedom, Timothy Snyder quotes a former Russian foreign minister: Putin, the man asserts, “realizes that Trump will trample American democracy and damage if not destroy America as a pillar of stability and major force able to contain him.”
Trump, in turn, serves as Putin’s understudy. By helping Bashar Assad savage Syria, Putin fueled a refugee crisis which destabilized European democracies ― whose response Trump then castigates as weak. Putin boosted the French xenophobe Marine Le Pen; so did Trump. Putin denounced NATO and the EU; Trump disparages them. Putin interfered in the British referendum on EU membership; Trump praises the result. Putin demeans America’s democratic institutions; so does Trump.
Certainly, Trump’s rhetoric mirrors Putin’s animus for essential elements of liberal democracy. The rule of law. A separation of powers. A loyal opposition. An independent media. Vigorous dissent. Limitations on executive authority. The chief difference lies not in attitude, but context. Russia has no democratic tradition or ameliorating institutions – America does. At times Trump’s envy seems palpable.
How to interpret this? In Fascism, A Warning, Madeleine Albright reprises the historic hallmarks of an aspiring authoritarian. These include stoking prejudice against others; igniting anger instead of compassion; inciting disbelief in democratic governance.
The list continues: attacking a free press and an independent judiciary; exploiting the symbols of patriotism to divide and demean; claiming a unique personal power to resolve societal problems; castigating opponents in degrading terms; habituating citizens to blatant lies.
Much of this typifies authoritarians of varied stripes. But fascism feeds on nationalism, nativism and ethnic grievance. As historian Robert Paxton wrote, it is “an affair of the gut more than the brain,” breeding “an obsessive preoccupation with humiliation… and victimhood.” Consider, then, Trump’s methodology and message.
The glue bonding Trump to his base is a suffocating dishonesty which, in Orwell’s words, “demands… the continuous alteration of the past, and… a disbelief in the very existence of objective truth.” Trump’s metronomic repetition of false narratives conjures a mounting dystopia, filled with antagonists he alone can defeat ― eroding fact and reason until his followers accept whatever message, however contradictory, his psyche demands at any given moment.

The fascist sensibility makes the world more dangerous, empowering autocrats to subjugate their citizens, menace their neighbors, vilify “the other.”

In this psychic netherworld, truth is the ultimate enemy. By embracing Trump’s lies, his tribe cements their loyalty, answering his cravings for obeisance. Thus intoxicated, history cautions, instinctive autocrats accelerate their war on institutional constraints, requiring their partisans to follow.
Trump’s message is eerily familiar ― a tribe menaced from without. His most visceral fictions vilify non-whites. An alien black president insinuated in our midst. Apocryphal minorities voting illegally en masse. Undocumented immigrants with fictitious crime rates. A non-existent wave of Syrian refugees bent on terrorism. Imaginary American Muslims celebrating 9/11. And only Trump can “take our country back” from these insidious enemies.
Also menacing are foreigners bent on emasculating true Americans. Job-stealing immigrants. Europeans cheating us in trade deals. Freeloading NATO “allies” sapping our public finances. A malign global order enfeebling America with its siren-song of democracy, human rights and multilateral cooperation. And only Trump will put “America First” ― an isolationist slogan from our nativist past freighted with ethnic animus.
The fascist sensibility makes the world more dangerous, empowering autocrats to subjugate their citizens, menace their neighbors, vilify “the other” and diminish our common humanity ― until, as history demonstrates, their compulsions breed catastrophe.
Perhaps the best synonym for “fascist,” Orwell wrote, was “bully.” In word and deed, Trump licenses mass cruelty. That the lawless sadism of family separation is so widely applauded by Trump’s followers augurs our devolution. Warns Albright, “There is... a tipping point where loyalty to one’s own tribe curdles into resentment and hatred, then aggression toward others. That’s when fascism enters the picture.”
It is tempting to suppose that our Constitution is impervious to corrosion. But already Trump, and his party, are curtailing democracy. Gerrymandering congressional districts. Attacking minority voting rights. Exploiting a campaign finance system which advances plutocracy. Weakening labor unions. Stacking the judiciary with partisan ideologues. Threatening the media and former intelligence officials. Enshrining theocracy. Immunizing kleptocracy. Accelerating inequality.
These harbingers of creeping one-party rule free Republican legislators to subordinate principle to self-perpetuation. In Trump’s thrall, our supposedly independent Congress has become a shell, ceding its constitutional obligations as House Republicans further his attacks on our legal and intelligence institutions.
Trump’s motive is to conceal an authoritarian attack on American democracy: Putin’s efforts to elect Trump president in 2016, and his ongoing attempt to manipulate our elections on Trump’s behalf. Special counsel Robert Mueller’s investigation seeks to determine whether Trump conspired in Russia’s efforts and whether, as president, he attempted to obstruct the investigation itself, thereby sabotaging the rule of law.
Here Trump’s enablers advance a claim of victimization redolent of fascism: that Trump’s ”civil liberties″ are threatened by political partisans bent on thwarting his followers’ will, and that even overt collusion with a foreign power would be a justifiable defense against the threat of his domestic opponents. In this Orwellian construct, Trump has absolute authority to conspire with Russia to subvert American democracy and to obstruct any inquiry into his actions. Such presidential conduct, they argue, is beyond prosecution or impeachment, placing Trump alone above the law.
They deploy baseless McCarthyite attacks on Mueller; portray Trump’s own Justice Department as biased and demand investigation ― and even impeachment ― of those officials striving to maintain their independence. In tribal America, this proto-fascist propaganda is working: a solid majority of Republicans believe that the FBI is framing Trump. The nightmare scenario conjured by Norman Ornstein is not beyond imagining ― Trump fires Mueller, pardons himself and, as chaos ensues, attempts to declare martial law.
More probable is that a supine Republican Congress and judiciary help Trump thwart accountability and, thus unbound, they further erode democratic norms. A Pew Research survey shows that only one in five Americans believe our democracy is working very well, while two-thirds want “significant changes.” As tribalism and income inequality deepen, Trump stands ready to help.
Fascism’s encroachment does not require a president-for-life. Sufficient is a “guided democracy” whose institutions, fatally hollowed out, are occupied by an illiberal cadre that holds increasingly unmediated political and economic power. That, sadly, requires less imagination ― for we have seen it before.Richard North Patterson is the New York Times best-selling author of 22 novels, a former chairman of Common Cause, and a member of the Council On Foreign Relations.