Britain's duty to the Palestinian people 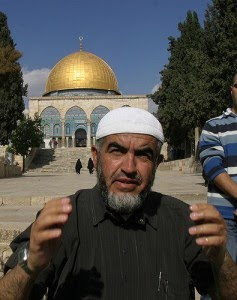 I came to the UK to talk about the plight of the Palestinians but ended up fighting deportation. This is what I wanted to say

"In June 2011 I came to Britain to begin a speaking tour to draw attention to the plight of my people, the Palestinian citizens of Israel. The tour was meant to last 10 days. Instead I had to stay for 10 months in order to resist an attempt by the home secretary, Theresa May, to deport me – itself the result of a smear campaign against me and what I represent. I fought not just for my own sake, but for all who are smeared because they support the Palestinian cause.
Since 1990 I have visited the UK several times to speak publicly. On this occasion I was arrested, imprisoned, and told I was to be deported to Israel because my presence in the UK was "not conducive to the public good". A judge later ruled that I had been illegally detained, but bail conditions continued to severely restrict my freedom, making it impossible for me to speak as I had intended.
After a 10-month legal battle, I have now been cleared on "all grounds" by a senior immigration tribunal judge, who ruled that May's decision to deport me was "entirely unnecessary" and that she had been "misled". The evidence she relied on (which included a poem of mine which had been doctored to make it appear anti-Jewish) was not, he concluded, a fair portrayal of my views. In reality, I reject any and every form of racism, including antisemitism.
I have no doubt that, despite this, Israel's cheerleaders in Britain will continue to smear my character. This is the price every Palestinian leader and campaigner is forced to pay.......
The Palestinian issue can only be resolved if Israel and its supporters in Britain abandon the dogmas of supremacy and truly adhere to the universal values of justice and fairness. Britain has a special responsibility in this, because it is uniquely responsible for our suffering: our national tragedy began with the Balfour Declaration.
While Britain enforced the first part of the declaration, which promised Palestine as a homeland for the Jewish people, but ignored the part that states: "It being clearly understood that nothing shall be done which may prejudice the civil and religious rights of existing non-Jewish communities in Palestine." If there is any lesson to be learned from this sordid affair, it is that there is nothing to gain from putting false words into my mouth, or casting me out of the mainstream of public discourse."
Posted by Tony at 4:14 AM