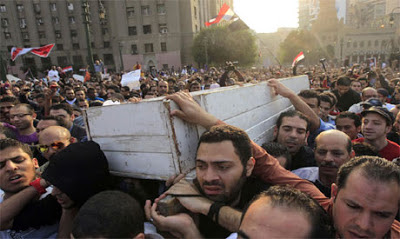 "Reports released by human rights organizations over the past months say that the targeting of activists and deliberate murder of civilians inside and outside detention facilities have been on the rise since President Mohamed Morsy was elected in June.
What’s more, the mounting number of cases seems to point to a systematic targeting of low-profile activists, and even bystanders.
The deaths of Gaber Salah, known as Jika, Mohamed al-Gendy of the leftist Popular Current movement, and Mohamed Qorany, known as Christie — all of whom were active in anti-Muslim Brotherhood Facebook groups — have led observers and rights groups to speculate that the activists were targeted for their political activities.
Rights lawyer Malek Adly tells Egypt Independent that such targeting is not new, but rather a consistent violation that has been taking place since the time of Hosni Mubarak’s regime, that also continued to take place during the military regime’s rule......"
Posted by Tony at 7:04 AM