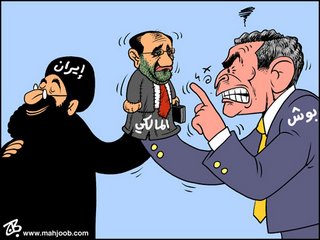 Around the oil city of Kirkuk Kurdish troops have advanced south to take over military positions abandoned by the army, while in Baghdad senior Iraqi politicians say that for the first time there is talk of partitioning the country.

The current crisis was sparked on 23 April when the Iraqi army attacked a sit-in protest in the Sunni Arab town of Hawijah, killing at least 50 people and injuring 110. Outraged Sunni Arab protesters have since stepped up their demonstrations against the Shia-led government. Demonstrators are increasingly protected by armed men, some of whom are accused of dragging five military intelligence soldiers in civilian clothes from a car that came near a protest in Ramadi and killing them.

There are signs that the Iraqi army can no longer cope with a crisis in which it is confronting both Sunni Arabs and Kurds. Many soldiers prefer to desert the army rather than shoot at protesters said Najmaldin Karim, the Kurdish Governor of Kirkuk, where Hawijah is situated, in an interview with The Independent. Most deserters are Sunni, Mr Karim said, but he added that some are Shia who don’t want to fight in strange places for something they don’t believe in.

Mr Karim, formerly a doctor in the US, confirmed that Kurdish troops have moved to take over positions around Kirkuk left vacant by the Iraqi army, but vehemently denies that this is a land-grab by the Kurds seeking to take over the oilfields as Iraqi army commanders have alleged. Affirming that Kurdish forces have taken over places vacated by the Iraqi army, he explained that Iraqi military units are under orders to leave their outposts at night and concentrate in defensible positions.
“They [Iraqi army commanders] are playing on people’s emotions and trying to detract from the fact that they attacked civilian demonstrators and killed scores of them at close range.”
Mediators seeking to end the protest in Hawijah last week say they only needed another six hours to end the confrontation when the army attacked.
A confrontation between the Kurds and the central government in Baghdad last summer has led to poor relations between the two. Security cooperation has broken down and there has been a 30 per cent rise in terrorist attacks in Kirkuk as a result. Last week al-Qa’ida in Iraq was able to take over the town of Suleiman Bec in Kirkuk province and only left under a truce arrangement
“It is really ironic,” says Mr Karim, “that at Hawijah the army attacks demonstrators including children and elderly. And then at Suleiman Bec al-Qa’ida killed the police chief. They captured and killed whoever was in the police station. The whole population of the town left. Terrorists controlled the town for 24 hours and then they were given safe passage to get out with their weapons and stolen cars.”

Iraqi politicians are gloomy about the prospects for keeping the country together. Mowaffak al-Rubaie, the former Iraqi National Security Adviser, said in a phone interview yesterday that for the first time he was  hearing leaders in Baghdad talk seriously of partitioning the country. He said ”I believe Iraq is going through its most critical phase since the creation of the state in 1921. " He said that for Iraq partition would not be a soft option but would be more like the bloodbath when India and Pakistan divided.
In the last four months Mr Maliki has done little to conciliate the Sunni Arabs who have been conducting a peaceful campaign demanding civil and political rights. They want an end to job discrimination and a terror law under which suspects can be arrested tortured on the word of an unknown informant. The protests were conducted largely without violence until the unexpected break-up of the Hawaijah sit-in. Sunni Arabs are now demanding that the army withdraw from their areas. A highly influential Sunni religious figure, seen as the inspirational leader of the protests, Abdul Malik al-Saadi, had previously counselled moderation, but last week issued a statement saying “if they open fire, then burn the land beneath them, and defend your selves with courage.”........"
Posted by Tony at 4:19 AM