Shaub, who quit job at head of Office of Government Ethics this month, describes ‘embarrassment’ of Trump’s business ties as president


The former head of the US government ethics watchdog has warned that Donald Trump’s conflicts of interest put the country at risk of being seen as a “kleptocracy”.
Speaking to the Guardian, Walter Shaub, who quit this month as director of the Office of Government Ethics (OGE), condemned the president for using his hotels and other properties for government business in what is in effect a free advertising campaign.
“His actions create the appearance of profiting from the presidency, and the appearance here is everything, because the demand I’m making is so much more than ‘have a clean heart’. It’s: ‘Have a clean heart and act appropriately,’” Shaub said. 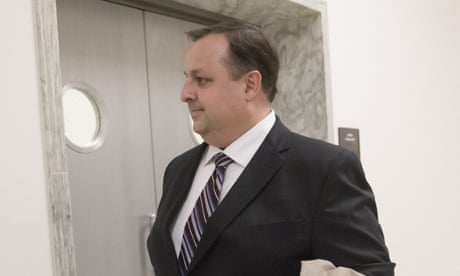 US government ethics chief resigns, with parting shot at Trump

Read more
“The fact that we’re having to ask questions about whether he’s intentionally using the presidency for profit is bad enough, because the appearance itself undermines confidence in government.”
He added: “It certainly risks people starting to refer to us as a kleptocracy. That’s a term people throw around fairly freely when they’re talking about Russia, fairly or unfairly, and we run the risk of getting branded the same way. America really should stand for more than that.”
The outspoken Shaub, 46, was a thorn in the side of the Trump administration, turning him into an unlikely star of the “resistance”. His name was spotted on placards at anti-Trump demonstrations and a fan pagematerialised on Facebook. The career government lawyer left the OGE almost six months before his five-year term was due to finish and is now senior director of ethics at the not-for-profit Campaign Legal Center, where he reckons he will be better placed to to push for reforms.
These are vital, Shaub argues, because Trump’s intertwined business and political interests, while not violating any laws, mark such a break from past norms that there is an “ethics crisis” in Washington.
“We can’t know whether his decisions are motivated by his policy aims or his financial interests,” he said, “and that uncertainty alone creates the problem because, whatever his intent, people having to ask undermines the faith in governmental decision-making and puts a cloud over everything the government does.”
The president regularly spends weekends on his family’s properties. On Saturday night, he dined at the Trump International hotel, halfway between the White House and the US Capitol. The luxury hotel is situated in the government-owned Old Post Office building, for which Trump signed a 60-year lease in 2013.
Shaub said: “It’s wildly inappropriate for him to be running a hotel that he’s leasing from the federal government. As a president, you shouldn’t be doing business with the United States government. He’s his own landlord at this point.”
Presidents such as John F Kennedy and Lyndon Johnson put their assets in a blind trust; Jimmy Carter did the same with his peanut farm and warehouse. Trump, who has not released his tax returns, announced before taking office that he would place his business interests – which include hotels, golf courses and merchandise – into a trust run Donald Trump Jr, his eldest son, and Allen Weisselberg, chief financial officer of the Trump Organization.
Trump is the sole beneficiary of the trust and retains the power to revoke it at any time.
Shaub said the steps Trump had taken were “meaningless” and he should at least have declared that he and his appointees would not attend events at his properties, removing the incentive for foreign businesses and politicians to hold gatherings there.
“But he’s not willing to do that because he’s too busy running around giving free advertising to his properties,” he said.
The Trump hotel has become a magnet for lobbyists and foreign diplomats. In February, Kuwait held its national day celebration there; in May, the hotel hosted a conference organised by the Turkey-US Business Council and American Turkish Council. Trump has business interests in at least 20 countries, including a $150m tower in the Philippines, golf courses in Ireland and Scotland and numerous projects in India.
Shaub continued: “You’ve had countries in the world who have suddenly booked major events at his hotel that they used to hold elsewhere. You’ve had businesses and charities – and these could be international businesses – with the ability to hold events at his place and basically funnel money to the president in the hopes that it will influence his decision making, and we can’t know for sure that it doesn’t.
“It may not, but again, it undermines faith in the integrity of government if we don’t know.”
Trump has praised the Turkish president, Recep Tayyip Erdoğan, and Rodrigo Duterte of the Philippines, leaders of countries where he has financial interests, Shaub noted.
“Or you have his ban on people from certain Muslim-majority countries coming into the United States – and the countries excluded from that list, in that region of the world, include countries where he has significant financial interests. So this raises questions about the extent to which the United States’ interests are coming first.”
A stormy month for the Trump administration has included the revelation that in June last year, Donald Trump Jr met a Russian lawyer he believed would offer damaging information about Hillary Clinton provided by the Russian government. The president claimed that any politician would have taken the meeting as part of opposition research. Shaub disagrees.
“That’s just a shocking claim,” he said. “That’s just terrible. It’s ridiculous to say that just about anybody else would have taken that meeting. No, you don’t go and meet with a foreign government that wants to share something with you while you’re in the inner circle of a campaign for the presidency.”
Over four decades, Democratic and Republican presidents have worked closely with the OGE. Shaub met Barack Obama but never came face to face with Trump, who showed little interest in government ethics and little support for the OGE. Shaub recalled that delegations from around the world had come to learn about the ethics programme and regard it as “the gold standard”.
“Now we’re anything but that,” he said. “In fact, we’re running around the world trying to promote anti-corruption measures and we don’t even have our own house in order. So it’s an embarrassment.”
Posted by Tony at 7:36 AM