Saudi has been cosying up to Israel for decades. MBS is making it official

The interview that the Israeli army chief, Lt Gen Gadi Eisenkot, gave to the Saudi news site Elaph in Arabic last week is another sign of the significant shift that has been underway in the Saudi approach to regional and international politics since the crown prince climbed to the top of the ladder of power in his own country.
Saudi-Israeli rapprochment
On the same day the interview was published and reported in the Israeli English language publication Haaretz, MEE reported exclusively that the Jordanian monarchy was extremely concerned that the Saudis were rushing to make peace with Israel and normalise relations with it at the expense of both the Jordanians and the Palestinians.
Despite having had its own peace treaty with Israeli since 1994, Jordan seems to fear a backlash if the Saudis were to conclude a deal that does away with the Palestinian right of return.
Nevertheless, it would not be accurate to assume that Saudi-Israeli rapprochement started with the ascent of MBS, as the Saudi crown prince is famously called. For a number of years, a few Saudi individuals, ostensibly acting in their personal capacities, were commissioned with the task of, or at least given the green light for, exploring and testing the waters.
Two in particular have been known to meet with Israeli officials at different levels and in various world forums, and have even made visits to Israel: the former head of Saudi Intelligence Prince Turki al-Faisal and former Saudi general Anwar Eshki.
View image on Twitter 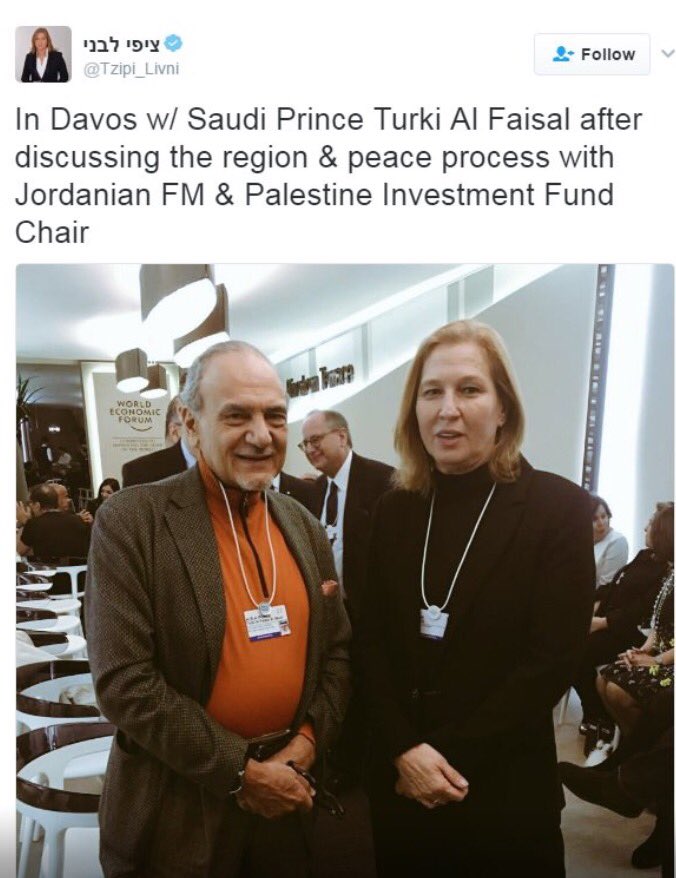 Twitter Ads info and privacy
Some may even date Saudi interest in doing business with Israel back to 1981 when in November of that year, at the Arab summit conference in Fez, Morocco, Crown Prince Fahd bin Abd Al-Aziz proposed his eight-point peace plan.
This was just under three years since Egypt divided the Arab world by singularly signing its own peace treaty with Israel at Camp David in 1978. Fahd's peace plan never took off for failing to win an Arab majority approval.
It took 20 more years for the Saudis to win an almost Arab consensus on what was initially a peace initiative by Saudi Crown Prince Abdullah bin Abd Al-Aziz which then became the Arab Peace Plan.
However, the plan, which offered Israel full Arab recognition and normalisation in exchange for an Israeli withdrawal to the pre-June 1967 lines, was never truly accepted by Israel, at least not without too many reservations.

The current Saudi rush toward normalising relations with Israel has been triggered by dramatic changes in the political scene.
To start with, the Saudis, who have been primarily responsible, together with the United Arab Emirates, for derailing the quest for democratisation in the Arab world, are jubilant that their counterrevolution has succeeded in restoring order, as they see it and favour it; one in which their hold on power and monopoly of resources is guaranteed.
As a result of the defeat of the Arab Spring and the collapse of the so-called resistance camp, a coalition that prior to the Arab Spring included Iran, Syria, Hezbollah, Hamas, Islamic Jihad and some other PLO factions, the Palestinians have been left in an unprecedented crisis and their liberation movement factions, especially Hamas, are struggling to survive.
Then came Donald Trump, whose arrival in the White House marked the beginning of a new era in US politics, one that promised a different approach to the Middle East. Conducting politics in a business-like fashion seemed to suit the Arab royals in the Gulf region and the military rulers of Egypt.

The first business deal to be conducted with the Trump administration was the endorsement of MBS as the future king of Saudi Arabia in exchange for hundreds of billions of Saudi investments in the United States. The deal also paved the way for normalising relations between the Gulf countries and Israel.
The deal, brokered by Abu Dhabi’s Crown Prince Mohammed bin Zayed, or MBZ as he is known, was consummated during the Riyadh summit in which leaders of nearly 50 Muslim countries rallied to meet the new US president. From then on Trump handed the matter over to his son-in-law, Jared Kushner, who is known for his special business, political and ideological ties to Israel. Iran and its proxies in the region have been extremely useful pretexts for the Saudi crown prince to proceed at full speed in the direction of forging a deal with Israel.
Having failed miserably in Yemen, Syria and Iraq, Saudi Arabia lost massive ground to the Iranians, who have boasted repeatedly about their successes and the fact that they ended up ruling the capitals of four Arab countries: Lebanon, Syria, Iraq and Yemen.
On Iran and Hezbollah, Saudi Arabia no longer shies away from saying that it sees eye to eyewith Israel. The common hostility toward Iran, which is said to be the most serious threat facing both Saudi Arabia and Israel, is believed to have brought the two regimes much closer than ever.

In September, it was even rumoured that a senior Saudi prince who visited Israel was in fact the crown prince himself. Yet, the most significant factor in the Saudi drive toward embracing Israel remains MBS's feverish desire to become king and to be blessed by the master of the White House.
The prince has shown himself to be willing to do what it takes and pay what it costs in order to fulfil this most pressing need. It is very likely that the series of measures taken locally to curtail any potential opposition is not unrelated to the quest for normalisation with Israel.

By removing from the scene intellectuals, scholars, academicians, senior princes, business tycoons and media moguls and by disempowering completely traditional religious institutions, MBS believes his way forward has been cleared of all likely obstacles.
Nor is this unlinked to the fiasco of detaining Lebanese Prime Minister Saad Al-Hariri and forcing him to announce his resignation from the Saudi capital, Riyadh.
Clearly, the Saudis have been eager to foment a crisis that might, in their reckoning, lead to an Israeli-Iranian confrontation in Lebanon and constitute, perhaps, the first significant collaboration between the kingdom and Israel.
Hezbollah leader Hassan Nasrallah claimed, in a televised address, that his group received information from credible sources that Saudi Arabia offered to pay Israel billions toward the cost of the next war on Hezbollah.

The dramatic events of recent weeks included a summoning of Palestinian Authority President Mahmoud Abbas to Riyadh where he was allegedly told bluntly he had to choose between collaborating with President Trump’s peace initiative or just quit.
This is believed to be a favour MBS has made to Kushner who has been put in charge of paving the way for Trump's peace initiative. US President Donald Trump and Palestinian Authority President Mahmoud Abbas in Washington, DC, on 3 May (AFP)

The Palestinians find themselves in the most awkward position. The Saudi crown prince's rush to normalise relations with Israel seems to have taken them, like many others, by surprise.
While sources close to Abbas denied that an ultimatum was given to him during his brief visit to Riyadh, privately the Palestinian Authority has been fearing the worst.
It did not take long for these fears to materialise. The Saudi ultimatum was soon confirmed and lent significant support by the Trump administration.
In a blatant act of blackmail, the State Department informed the Palestinians that the licencefor their PLO office would not be renewed unless they met two conditions: engage in the peace process with Israel and refrain from taking Israel to the International Criminal Court in The Hague.

While sources close to Abbas denied that an ultimatum was ever given to him during his brief visit to Riyadh, privately the Palestinian Authority has been fearing the worst

The course of events indicates clearly that the Trump administration's own ultimatum, which tells the Palestinian Authority (PA) that it would be ostracised for appealing to international law and to international institutions, could not have been made without coordination with both the Saudis and the Israelis.
It may not have been a mere coincidence that before the Palestinians woke up from their shock, Israel's energy minister Yuval Steinitz spoke publicly about close Saudi-Israeli cooperation.
Although the focus was said to be the endeavour to challenge Iranian expansionism, the message to the Palestinians was that "we are taking off" with you or without you. Steinitz's remarks confirm what Israel's chief of staff said earlier in the week to Elaph about the intimate links and security coordination that have been forged between Israelis and the Saudis.
Rumours have it that, next week, Saudi Arabia may see the official crowning of MBS upon the abdication of his father. It may not take the Saudis long, afterwards, before they see the Israeli flag hoisted on a rooftop in Riyadh.


- Azzam Tamimi is a British Palestinian academic and political activist.
Posted by Tony at 7:26 AM