A 'stable genius' or white trash in the White House?

The revelations in Michael Wolff's new book have painted a picture of a confused, angry and very unpredictable administration 
One of the delights of reading Michael Wolff’s account of life in White House is to picture the US president doing the same.
You can see him wearing his golf face, stomping up and down the cramped presidential lodgings, screaming down his mobile phone. As he does so, his signature comb-over starts to unravel, revealing his bald pate. 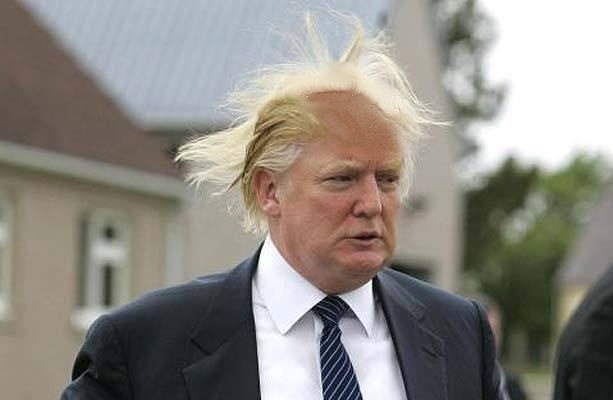 Who persuaded him to allow that Judas Wolff a "semi-permanent seat on a couch in the West Wing?" 200 interviews? Where are the transcripts? He wants all of them on his desk by the morning.
How many other "seething, self-pitying and unsolicited phone calls" must he now be making?
On Saturday, he took to Twitter to defend himself against accusations that he was mentally unstable, reassuring his followers that he was in fact a "very stable genius".
The light that Wolff sheds on the occupant of the White House is stark and unforgiving.
Shocked and awed by the success of his own campaign, in which he was reluctant to invest his own money, Trump has never come to terms with what being a president of the United States means. He does not listen, and when he does he acts on the last person he speaks to.
He is incapable of judgement. He is obsessed by the media and a slave to it.
Ivanka his daughter had long ago figured out how to make successful presentations to her father.
She told her protege Dina Powell, as related by Wolff: "You had to push his enthusiasm buttons. He may be a businessman, but numbers didn't do it for him. He was not a spreadsheet jockey - his numbers guys dealt with spreadsheets. He liked big names. He liked the big picture - he liked literal big pictures. He liked to see it. He liked 'impact'."
Trump became bored, listless and irritable with small stuff - such as detail, process or indeed informing himself as to what was actually going on.
What he needed was something big, a demand particularly unsuited to the volatile state of world.
"Big things, we need big things," he said, angrily and often. "This isn't big. I need big. Bring me big. Do you even know what big is?"

The gut instinct of foreign leaders whose nations depend on their military or economic ties to the US will be to put as much distance between themselves as this self-immolating man in the White House.

This was how Trump’s restless but truly empty mind alighted on the Middle East.
“He had no patience with the our-hands-are-tied ennui of the post-cold war order, that sense of the chess board locked in place, of incremental movement being the best-case scenario—the alternative being only war. His was a much simpler view: Who’s got the power? Give me his number.”
“And, just as basically: The enemy of my enemy is my friend. If Trump had one fixed point of reference in the Middle East, it was—mostly courtesy of Michael Flynn’s tutoring —that Iran was the bad guy. Hence everybody opposed to Iran was a pretty good guy.”
But it was also how the Middle East settled on Trump.

Mohammed bin Salman for one appreciated the fact that Jared Kushner had not earned his position as the administration’s Middle East envoy by virtue of anything he had personally achieved, but solely by the fact that he was a family member. This comforts a member of the Saudi royal family, because this is exactly how things are done at home.
Wolff observes “a curious alignment” between Trump and MbS in that neither had any education outside their respective countries.
“Knowing little made them oddly comfortable with each other. When MBS offered himself to Kushner as his guy in the Saudi kingdom, that was 'like meeting someone nice at your first day of boarding school,' said Kushner’s friend." US President Donald Trump (3L), US First lady Melania Trump (2L), Saudi Arabia's King Salman bin Abdulaziz al-Saud (C), and Egypt's President Abdel Fattah el-Sisi (3R) pose for a group photo with other leaders of the Muslim world (AFP)
The Riyadh trip was big. The Saudis would immediately buy $110bn of US arms and a total of $350bn over ten years. The Saudis threw a $75m party, seated Trump on a throne, and ferried the first family around in gold golf carts.
Trump called home to tell his friends how easy this foreign relations thing was and how Obama had messed it all up. Before the trip he had nothing but praise for his son in law.
“Jared’s gotten the Arabs totally on our side. Done deal,” he assured one of his after-dinner callers before leaving on the trip. “It’s going to be beautiful.” “He believed,” said the caller, “that this trip could pull it out, like a twist in a bad movie.”
So much for the fun. Now for the horror.
Imagine the blood draining from the faces of America’s allies as they read how the man running the White House really functions. The gut instinct of foreign leaders whose nations depend on their military or economic ties to the US will be to put as much distance between themselves as this self-immolating man in the White House.

[Trump's] logic is rather like saying that because the last three bomb disposal teams have failed to defuse that 500 pound bomb workmen uncovered in your basement, why not try yourself it with that angle grinder your son gave you for Christmas.

Anyone who has not already bailed out of this nosediving presidency is probably already politically dead and that includes Trump, Kushner, Ivanka, Nikki Haley. Those who have jumped from the crashing plane like Bannon are probably also finished.
The same toxic effect that Trump is having on the occupancy rates of his hotel chain, will also soon be felt by US allies. Soon, it will be not such a good idea to share a public platform with him . Theresa May will  be in no hurry to make Trump’s reciprocal visit the UK, as head of state, happen.
Trump’s big idea of a Middle East breakthrough is finished before it even started. His administration is going to reek its revenge on the Palestinian President Mahmoud Abbas, the one and only interlocutor he could have had for it, for having led the UN  vote against Trump’s announcement that he is moving his embassy to Jerusalem.
Defunding UNWRA, the UN agency that provides schools and relief to Palestinians is only the start of it.

Trump’s rage is as damaging as his enthusiasm was, because as Wolff more or less constantly notes, Trump’s structural handicap as president is his inability to marry cause and effect.
Even Benjamin Netanyahu, the Israeli leader who has most to gain from Trump, and is using the policy vacuum created by Trump to annex the settlements around Jerusalem, must be having second thoughts about the damage Trump can do him.
Because the state of Israel can not quietly but persistently push its borders further and further into the West Bank, if the financial rug is pulled entirely from under the feet of a Palestinian Authority, a body which above any other has helped Israel achieve its cheapest period of occupation. Under the PA, the Palestinians occupy themselves.
For decades Israel’s policy was predicated on keeping the Palestinians “on a diet”, as one former prime ministerial aide put it, in the various enclosures it had constructed for them.
This meant balancing overt oppression with a measures of life support. Israel turned migrant Palestinian labour on its building sites on and off like a tap. The last thing it needed for the continued expansion of Israel, was for the Palestinian economy and social system to collapse altogether, which is where Trump’s rage at the UN reaction to Jerusalem move is taking him. Indonesian protesters pose with cutout portraits of US President Donald Trump and Israeli Prime Minister Benjamin Netanyahu during a protest in front of the US consulate general in Surabaya, East Java province (AFP)
Similarly European powers who negotiated the nuclear deal with Iran must be having grave thoughts about the capacity of Trump to wreck what few foreign policy achievements have been made by previous US administrations. Trump is a wrecker, in command of a very large wrecking ball. America can not be isolated or put under sanctions. Its economy is too large for that, and the world is too dependent on it.
There is of course a positive side to Trumpism.
In one respect Trump is right. The last three administrations, and many more before them, had gotten the Middle East wrong.
But his logic is rather like saying that because the last three bomb disposal teams have failed to defuse that 500 pound bomb workmen uncovered in your basement, why not try yourself it with that angle grinder your son gave you for Christmas.
So apart from destroying himself, which I am convinced is what he is doing, Trump will bring down with him the international consensus on Palestine, which is to shield Israel from any attempt to isolate it internationally. Trump will expose Israel to the need for international sanctions like no other president before him.
Trump is also recreating a real US left, for which he deserves our undying thanks. Neoliberalism at home and neo-Conservatism abroad had cross party support. What Bush continued in Iraq, Clinton started in post-Soviet Russia. That era has been shattered .
This does not mean that Trump cannot start a war. The way he was persuaded to bomb Syria, by his daughter showing him pictures of gassed Syrian children, is telling. The president is not weighing arguments but images. But it means he can not win one.
Wolff’s shrewd portrait forms another exhibit in the gallery of a future exhibition, to be mounted by the Smithsonian in Washington entitled: “End of Empire”.
Empires collapse when they become too costly for their centres to hold them. This is happening now. Yes this is a president fundamentally unfit for office, but it is also true that Trump is himself a product of failure, and that failure belongs collectively to more than one president and more than one administration.
In this sense that ball of fire and fury  that is Trump is doing the world a favour. It is forcing it to rethink the world without America. That has to happen before anything changes.
- David Hearst is editor-in-chief of Middle East Eye. He was chief foreign leader writer of The Guardian, former Associate Foreign Editor, European Editor, Moscow Bureau Chief, European Correspondent, and Ireland Correspondent. He joined The Guardian from The Scotsman, where he was education correspondent.
Posted by Tony at 8:41 AM