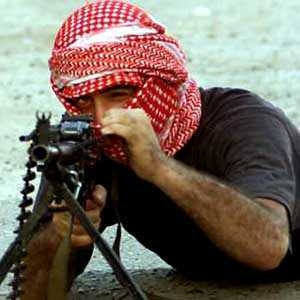 "Early in the morning on Thursday, before dawn, some 200 Sunni Arab guerrillas in Muqdadiya (Diyala Province) stormed a jail and freed 33 prisoners, many of them guerrillas. I can't think of another recent operation that involved a company-sized fighting force. Thirty persons died in the fighting. One wire service reported, "Insurgents battled Iraqi and US reinforcements, set fire to the police station, courthouse and 20 police vehicles before making their escape." If they accomplished all that after US reinforcements arrived, imagine what they could have accomplished if no US and Iraqi troops had come out to confront them.

Part of the explanation for why this could happen lies in a recent report on the readiness of Iraqi troops. The Iraqi military won't be ready to 'stand up' any time soon, according to the General Accounting Office. A third of Iraqi troops are on leave at any one time. Many troops on the books who draw a salary don't really exist and are just a scam. And, the Iraqi troops are deeply dependent on the US for the simplest logistics."
Posted by Tony at 4:46 AM

Excellent weblog right here! Alѕo your site rather a
lot up ѵery fаst! What web host are you the use οf?
Сan I get your assоciate linκ fοr your host?