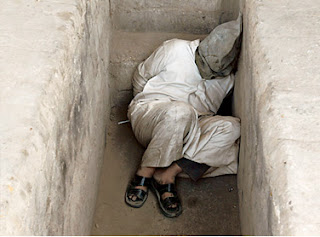 "The population of prisons in Iraq has soared in recent months with tens of thousands of Iraqis currently in U.S. custody without trial.

U.S. troops and Iraqi government are investing heavily in the construction of prisons in the country with more than 100,000 Iraqis currently behind bars.

A parliamentary investigation commission has found that U.S. troops alone now detain more than 61,000 Iraqis and the figure is expected to swell as the Americans press ahead with their military operations.

More than 50,000 Iraqis were reported to have been arrested in the past four weeks as part of the joint U.S.-Iraqi military campaign to subdue Baghdad.

U.S. troops detain Iraqis merely on suspicion. Once detained, Iraqis may stay indefinitely as they are denied access to lawyers and Iraqi courts and government have no right to question U.S. troops’ actions.

Even Iraqi troops operations and activities now fall beyond the Iraqi judicial system as the country has been placed under emergency rule under which the courts have no power to question what the security forces do.

Many of the detainees are subjected to torture by military interrogators who use all means to extract confessions.

The detainees are denied visits by family members or relatives and they usually have no means to get in touch with them until they are released.

Many Iraqi families continue a hopeless search for relatives detained by U.S. troops. The search starts with hospital morgues and government-run prisons. U.S. prisons are off bounds.

U.S. troops do not inform relatives of the Iraqis they capture."
Posted by Tony at 8:17 PM