One of Tanya Reinhart's Last Speeches 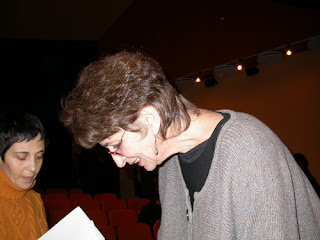 "....AMY GOODMAN: Tanya Reinhart, giving one of her last speeches, actually, just over a month ago. That discussion we had in October 2004. But she was just here in New York at St. Mary's Church. She was speaking as part of Israel Apartheid Week.

Just two years ago, the Western world hailed “the best of democracy in the Middle East” with Arafat departing and the Palestinian people getting ready for their elections. According to Jimmy Carter, in a report he wrote in the Herald Tribune, the Palestinian elections were, I quote, "honest, fair, strongly contested, without violence and with the result accepted by winners and losers." Among the sixty-two elections that had been monitored by the Carter Center, these are among the best in portraying the will of the people.

In a just and well-ordered world, it would be unthinkable that a government that was elected in this kind of a process will be ignored just because Israel does not like the choice of the Palestinian people. But in a world in which the US rules, might is right, and might can define democracy as it wills. Thus, it was announced that the outcome of the Palestinian elections will not be recognized, and until this changes, the Palestinian people as a whole should be punished and starved.

What we see now, since then, is that the US is trying, together with Israel, to impose a longstanding policy that they have always had of trying to push the society into civil war. They are doing this in Palestine by supporting collaborating forces like the forces of Dahlan in Gaza. They are trying to do the same in Lebanon. They are trying this in Iraq. This is the US policy.

The way this is packed is the demand of the Palestinian -- the Palestinians are demanded to meet the quoted three demands, the three mantras that keep repeating. The first mantra is that the Palestinians should renounce violence, specifically Hamas should renounce violence. It's very hard to understand the content of this demand. Already in January 2005, when the Hamas announced that they are -- Hamas announced that they are going to move from armed struggle into political struggle and enter the elections, and since then, there wasn't a single terror attack perpetrated by the Hamas. According to Israeli security sources, the Hamas didn't even participate in launching of Kassams to Israel until the events of last summer, when Israel attacked Gaza.

The second demand is that the Palestinians should recognize previous accords. In an interview with the the Washington Post already a year ago, Hamas Prime Minister Haniyeh explained that according to the Oslo Accords in 1993, five years later in ’98, there should have been already a Palestinian state. Instead, what Israel did during this whole period was appropriate more land, continue to colonize, to build settlements, and it did not keep a single clause of the Oslo Agreements. “From now on,” Haniyeh said, “we will only accept and respect agreements that are good for the Palestinian people.”

Click Here to Watch, Listen or Read Transcript
Posted by Tony at 12:52 PM