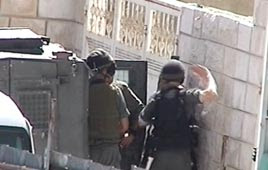 (VIDEO) Israeli policemen caught on camera abusing 17-year-old Hawara teen who was on his way home from school. Local residents say life in village has become nightmare due to Border Guard violence. Border Guard chief says incident will be investigated

"VIDEO - Border Guard policemen were caught on camera beating a 17-year-old Palestinian youth at the West Bank village of Hawara, near Nablus Wednesday. The incident was documented by one of the local residents.....

The youth, Hindawi Qawarik, told Ynet that at about 12:30 pm Wednesday, he and his friends were leaving school when they noticed a Border Guard jeep not far from them.

"I told my friends that if we pass near them, they'll hit us like they did a few weeks ago," he said.

The policemen approached the youths and questioned them regarding a stone-throwing incident that took place earlier. They then decided to detain three of the teens for further questioning.

Hindawi was one of those three. "I pretended not to hear them and kept walking, because I could still remember the beating I got last week. But one cop chased me. When I saw that he was after me I halted. He dragged me back to the direction of the jeep, and when we got there he pushed me and pinned me to the wall, so that no one will be able to see what they were doing to me."

At this point, according to Hindawi, the violence began. "Two of the policemen started hitting me in the legs with a rifle, punching me, slamming my head against the door of a nearby container, pushing me to the floor and hitting me in the head.

"I kept screaming: I haven't done anything, you can check my ID." Hindawi said that one of the policemen tried to persuade the others to stop, "but they just ignored him and kept on hitting me."

According to the teen, one of the policemen also took books out of his school bag and tore some of them apart. Then they released him, not before "a few more slaps and punches." Hindawi's account has been verified by an eyewitness.

'Our lives have become a nightmare'

Hindawi told Ynet that the police violence has already become a daily routine in the village. "We already got used to the beatings, but it makes it very hard for us to study… very often we miss the first two classes of the day because they detain us, humiliate and hit us."

Other Hawara residents told Ynet that soldiers and policemen, mostly Border Guard policemen, have turned their lives into a nightmare. "Once every few days the policemen and the soldiers declare a curfew in the village, claiming that Border Guard jeeps have been stoned," they said.

One of the residents said that in addition to the violence, the policemen harass the village girls, a thing that causes "severe social problems within the Palestinian families and social and psychological problems for the girls, who are forced to handle curses that are unacceptable in our society."....."
Posted by Tony at 7:52 AM