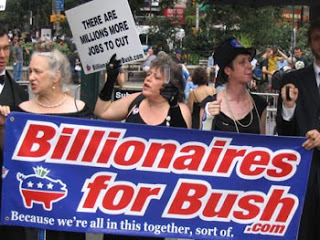 The Billionaires and How They Made It

Given the enormous class and income disparities in Russia, Latin America and China (20 Chinese billionaires have a net worth of $29.4 billion in less than ten years), it is more accurate to describe these countries as 'surging billionaires' rather than 'emerging markets' because it is not the 'free market' but the political power of the billionaires that dictates policy.

The period of greatest decline in living standards in Latin America and Russia coincide with the dismantling of the nationalist populist and communist economies. Between 1980-2004, Latin America ­ more precisely Brazil, Argentina and Mexico ­ stagnated at 0 per cent to 1 per cent per capita growth. Russia saw a 50 per cent decline in GNP between 1990-1996 and living standards dropped 80 per cent for everyone except the predators and their gangster entourages.

Recent growth (2003-2007), where it occurs, has more to do with the extraordinary rise in international prices (of energy resources, metals and agro-exports) than any positive developments from the billionaire-dominated economies. The growth of billionaires is hardly a sign of 'general prosperity' resulting from the 'free market' as the editors of Forbes Magazine claim. In fact it is the product of the illicit seizure of lucrative public resources, built up by the work and struggle of millions of workers, in Russia and China under Communism and in Latin America during populist-nationalist and democratic-socialist governments. Many billionaires have inherited wealth and used their political ties to expand and extend their empires ­ it has little to do with entrepreneurial skills. 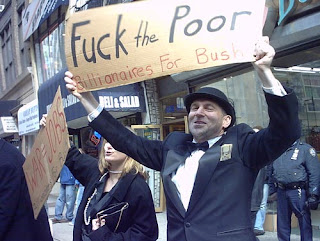 The billionaires' and the White House's anger and hostility toward President Hugo Chavez of Venezuela is precisely because he is reversing the policies which create billionaires and mass poverty: He is re-nationalizing energy resources, public utilities and expropriating some large landed estates. Chavez is not only challenging US hegemony in Latin America but also the entire PDD edifice that built the economic empires of the billionaires in Latin America, Russia, China and elsewhere."
Posted by Tony at 7:36 AM