Articulating a Just Peace: Whose Responsibility? 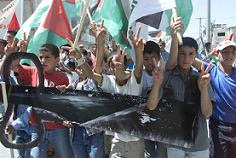 Only a consistent, cohesive and reasonable strategy that emanates from the Palestinians themselves can engage international public opinion and possibly slow down the Israeli army bulldozers currently carving up the West Bank into a system of cantons and high-walled prisons.

".....It is never easy to admit that the Palestinian front, both at home and abroad, remains more fragmented and self-consumed, thus ineffective than ever before.

Such a realization wouldn’t mean much if the inference concerned any other polity; but when it’s made in regards to a nation that is facing an active campaign of ethnic cleansing at home and an international campaign of sanctions and boycott, the problem becomes both real and urgent.....

Other major issues such as settlements, water, refugees, borders, continue to be subjected to unilateral Israeli actions, while the Palestinian role is relegated to that of a hapless, submissive and often angry victim.

If such decisive matters go largely unchallenged by a solid, popular Palestinian strategy, one mustn’t be surprised if other issues, such as the need to restructure the progressively more fragmented Palestinian national identity, the need for a powerful, sustained and articulate Palestinian voice in the media and an influential body that unites and channels all Palestinian efforts around the world to serve a clear set of objectives, are receiving little or no attention whatsoever.

It must also be acknowledged, as uncomfortable as this may be to some, that the Palestinian democratic experience is rapidly succumbing to Israeli pressures, American meddling — tacitly or otherwise, coordinated with other governments — and the fractious Palestinian front that has been for decades permeated with ideological exclusivism, cronyism and corruption.

The Palestine Liberation Organization (PLO), since its formation by the Arab League in 1964, but most significantly since its reformation in the early 1970s under Palestinian leadership, was for long regarded as the main body that eventually brought to the fore the Palestinian struggle as — more than a mere question of a humanitarian issue that needed redress — a national fight for freedom and rights.

There was, more or less, a national movement that spoke and represented Palestinians everywhere. It gave the Palestinian struggle greater urgency, one that was lost, or willingly conceded, by Yasser Arafat on the White House lawn in September 1993, and again in Cairo in May 2004, and yet again in Paris, Sharm al-Sheikh and so forth.

Aside from snuffing out the Palestinian national project, reducing the territory to self-autonomous areas, rendering irrelevant millions of Palestinians, mostly refugees scattered around the world and thus demoting the international status of the PLO to a mere symbolic organization, Oslo gave rise to a new type of thinking among Palestinians who see themselves as pragmatic and whose language is that of real politic and diplomacy.

This is the most woeful case of self-defeatism, and it continues to infuse most Palestinian circles whose new “strategy” is limited to acquiring funds from European countries which eventually dotted the West Bank with NGOs, mostly without a clear purpose, agenda and coordination......

Neither a religious movement like Hamas nor a self-exalted one like Fateh is capable of approaching this subject alone, nor are they individually qualified to alter the Palestinian course, which seems to be moving in random order.

The problem is indeed bigger than mere ideological or even personal quarrels between two rival political parties; rather, it is the expression of a prevailing Palestinian factionalism that seems to consume members of various Palestinian communities regardless of where they are based.

In the absence of centrality everywhere, individuals hoping to fill the vacuum are offering their own solutions to the conflict, once more without any serious or coordinated efforts and without a grassroots constituency either in the occupied territories or among major Palestinian population concentrations in Lebanon, Syria, Jordan, etc.

Others, like the Geneva Initiative enthusiasts, find it acceptable to negotiate a solution on Palestinians’ behalf — without any mandate whatsoever — and obtain sums of money to promote their ideas, though the whole enterprise is run by a few individuals who have no support from the Palestinians.

Oslo has lost its relevance as a peace treaty, but the individualism it espoused among Palestinians still prevails; its legacy was self-preservation at the expense of the collective good, and I believe no Palestinian party, including Hamas, is immune from subscribing to its luring values......"
Posted by Tony at 10:27 AM