'No comment' from PMO officials on Olmert-Saudi meeting reports 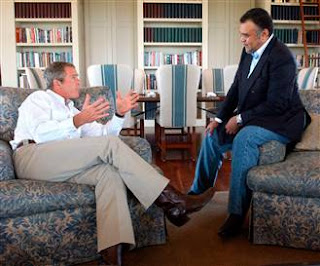 "Officials in the Prime Minister's Bureau refused to comment on Saturday on reports that Prime Minister Ehud Olmert met with a senior Saudi representative in recent weeks.

Meanwhile, United Nations Secretary-General Ban Ki-Moon on Saturday arrived for a visit to Israel and the Palestinian Authority.

Prince Bandar visited Washington last week for talks with senior American officials ahead of the Arab summit in Riyadh this Thursday and Friday. The summit is expected to reapprove the 2002 Arab peace initiative calling for normalization of relations with Israel in exchange for withdrawal from all territories, a Palestinian state and a "just solution" to the Palestinian refugee problem.

Columnist Tom Friedman wrote Friday in The New York Times that there were rumors that a senior Saudi official had met with Olmert ahead of the Riyadh summit.

Government sources in Jerusalem said they would respond after decisions were made in Riyadh. Olmert has said recently that he welcomed the "positive parts" of the Saudi initiative.

Foreign Minister Tzipi Livni has expressed strong opposition to the clause on refugees, which the Palestinians interpret as a right of return. Arab leaders say they will make no changes in the initiative.

Following the establishment of the Palestinian unity government, a flurry of diplomatic activity is expected in the region over the next few days, starting with the visit of Ban Ki-Moon....."

Rejoice Palestinians! Bandar Bush will liberate Palestine for You.
Posted by Tony at 6:48 PM