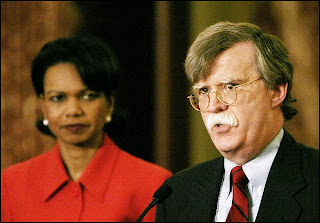 A former top American diplomat says the US deliberately resisted calls for a immediate ceasefire during the conflict in Lebanon in the summer of 2006.

"Former ambassador to the UN John Bolton told the BBC that before any ceasefire Washington wanted Israel to eliminate Hezbollah's military capability.

Mr Bolton said an early ceasefire would have been "dangerous and misguided".

He said the US decided to join efforts to end the conflict only when it was clear Israel's campaign wasn't working.

The former envoy, who stepped down in December 2006, was interviewed for a BBC radio documentary, The Summer War in Lebanon, to be broadcast in April.

Mr Bolton said the US was deeply disappointed at Israel's failure to remove the threat from Hezbollah and the subsequent lack of any attempt to disarm its forces.

Britain joined the US in refusing to call for an immediate ceasefire.

Mr Bolton now describes it as "perfectly legitimate... and good politics" for the Israelis to seek to defeat their enemy militarily, especially as Hezbollah had attacked Israel first and it was acting "in its own self-defence".

Mr Bolton, a controversial and blunt-speaking figure, said he was "damned proud of what we did" to prevent an early ceasefire.

Also in the BBC programme, several key players claim that, privately, there were Arab leaders who also wanted Israel to destroy Hezbollah.

"There were many not - how should I put it - resistant to the thought that the Israelis should thoroughly defeat Hezbollah, who... increasingly by Arab states were seen as an Iranian proxy," said UN special envoy Terje Roed Larsen....."
Posted by Tony at 12:42 PM