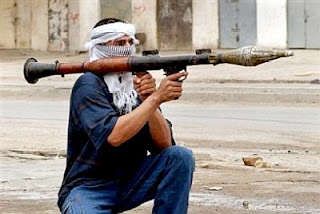 "The following graphs show the steady progress of the Iraqi resistance over the four years of occupation. They are extracted from the Iraq Index (pp 23 and 24) and updated on 19th March 2007.

The first graph shows that the average number of attacks have more than doubled in the last year to about 185 per day. That is 1300 per week, and over 5500 attacks per month. Another way of understanding this is that in any one hour, day and night, there are 7-8 new mortar attack, IED, sniper fire, etc. The figures are based on variety of official and semi-official US sources and estimates. The inclusion of ‘Militias’ in the title of the graph is recent, and seems linked to the evolving political vocabulary by the US. In the light of the two other items. Militia can be understood to refer to local vigilantes that are largely part of the resistance.

The second graph shows that 75% of the recorded attacks,(here based on the quarterly reviews to congress only) has remained directed at the occupation forces directly, and further 17% at the Iraqi government forces. The remaining, 8% are directed at unspecified civilian targets. It is the later that makes it to the media.
The official Iraqi government security forces numbers have been steadily rising and now stand at about 330 000. They often act as forward or guard units for the occupation forces. It is not known what proportion of the attacks on "civilians" who are in fact mercenaries who operate in civilian clothes and are often based in civilian areas. The official US estimates is of 100,000 private contractors in Iraq. Other civilian targets may be Facility Protection Forces, whose number is estimated by the government at 150 000, or at real civilians. Word on the Iraqi street is that attacks on real civilians are the work of occupation agents, a version of events that is at least as credible as the mad fanatics attacking each other.

The third figure gives the geographic distribution of the resistance attacks. There are small shifts in pattern over time, but the frequent clashes in most southern provinces seem not to be included. This may indicate that the figures used refer only to resistance actions. It must be noted that the 800 km supply route from Kuwait to Baghdad through several southern provinces is the most heavily protected one in the world, with massive funds paid to contractors, ‘tribes’ and local militias.

The Iraq Index is produced by the Washington-based Brookings Institutions. It comes in 54 pages of tables, graphs and footnotes in PDF format, half of which on security indicators.

The index has been updated weekly over the last four years, in whatever section new data become available. The authors are Michael E. O’Hanlon and Jason H. Campbell......."