Iraq: A country drenched in blood 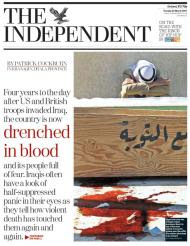 Four years to the day after US and British troops invaded Iraq, its people are full of fear. Iraqis often have a look of half-suppressed panic in their eyes as they tell how violent death has touched them again and again.

One of the Worst Articles
By Patrick Cockburn

"......Diyala, its once-prosperous villages now becoming heavily armed Sunni or Shia fortresses, is a symbol of the failure of the occupation that began four years ago. From an early moment it was evident that only the Kurds in Iraq fully supported the US and British presence.

The invasion four years ago failed. It overthrew Saddam but did nothing more. It destabilised the Middle East. It tore apart Iraq. It was meant to show the world that the US was the world's only superpower that could do what it wanted. In fact it demonstrated that the US was weaker than the world supposed. The longer the US refuses to admit failure the longer the war will go on."
Posted by Tony at 4:29 AM