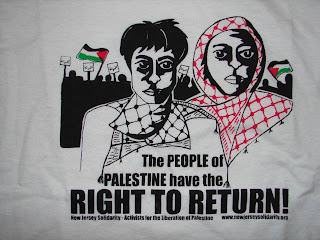 ".....Not that a war against Iran is no longer on the agenda; on the contrary, something will be done to confront the Iranian "threat". But one has to understand that Israel cannot possibly allow for a regional bully aside from itself to emerge.

It was this logic, as articulated by Richard Pearle in a set of recommendations made to then Likud leader Benyamin Netanyahu in the infamous "Clean Break" memo that envisaged the Iraq war as a strategic Israeli imperative. Iraq or Iran, Sunni or Shia, are all irrelevant semantics, in Israel's view. The failure, however, to "contain" Iran, coupled with America's disastrous war strategy in Iraq, which has given rise to powerful Shia groups with direct links, and in some cases allegiance, to Tehran is sending Israel's military and policy planners to the table, once more, to study their future options.....

The power of the Israeli lobby and the persisting influence of the neocons have reached new heights when Democratic leaders were obliged to strip from a military spending bill a requirement that the president must gain the approval of Congress before moving against Iran. Pelosi and others agreed to such a removal "after conservative Democrats as well as other lawmakers worried about its possible impact on Israel," reported ABC News.

With Iran in focus, coupled with serious worries amongst some Arab countries regarding its possible destabilising role in the region, Israel has agreed to a conditional arrangement: contain Iran to Israel's benefit; stabilise Iraq to the Bush administration's benefit; and introduce a new horizon of peace with the Palestinians to appease the Arabs.

The new horizon of peace -- a new term invoked by Condoleezza Rice in her recent visit to the region -- is basically the old "peace process": significant enough insofar as it yields a sense of hope, but clever enough in guaranteeing nothing, since Israel, assured of unprecedented clout in the corridors of power in Washington, will neither give up its grand plans of territorial expansion and annexation, halt its construction of the gigantic apartheid wall, nor surrender an inch of the illegally-annexed East Jerusalem -- all, predictably, key Arab and Palestinian demands.

Meanwhile, the Arab initiative always seemed vague on the issue of Palestinians made refugees by Israel in 1948 and 1967 and whose plight is as urgent as ever (especially considering their systematic targeting in Iraq, including 500 murdered to date, and Libya's decision to deport its cache of Palestinian refugees to Gaza, as callous as this seems). In order to remove any remaining ambiguity, Israeli Foreign Minister Tzipi Livni is "demanding that the leaders of the 22 Arab states excise the right of return from [the Palestinians]," reports Haaretz.

By crossing out the "controversial" elements contained in the Arab initiative and then opening it up for negotiations, Palestinians -- now browbeaten with a year of embargo and near starvation -- will be taken on another peace-loving goose chase, during which Israeli army bulldozers will hardly cease their determined colonial project. My fear is that Arabs will play along, willingly or not, and Palestinians will be forced to partake in the charade, for their reliance on international handouts for mere survival will make it impossible to defy US-Israeli regional designs forever."
Posted by Tony at 8:34 PM