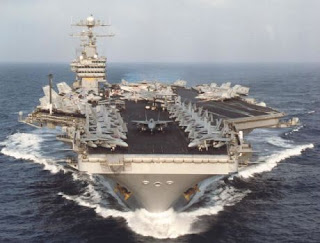 "......But it is Cheney – not al Qaeda – who is watching the clock now. This former Secretary of Defense understands only too well that the deployment of two battle groups in the Persian Gulf, and the onset of this year's "spring offensive" in Afghanistan both point to a ticking clock – second-generation shock and awe forces require many months of planning, and a massive logistics tail to support even a short-lived coordinated attack. The clock is indeed ticking, and nothing must get in the way of that. It is not ticking for the occupied Palestinian territories, nor the fractured and dazed Iraqis living out some kind of neo-colonial nightmare. Those efforts are perfectly on track, as hoped for, and AIPAC completely understands this.

It is all about Iran. The U.S. military, from the tone and content of Cheney's speech, is now ready, and the window is open. The administration may actually be a bit behind in building its public case – at least one as plausible as the false case made by this same administration less than five years ago regarding Iraq. Part of this case-making process entails boxing the Congress, and preventing that body from asserting its collective intellect, refreshing its own collective familiarity with truth, justice, reality and even the Constitution. Iran is back on the table, and the House warning language on Iran stricken.

70% of the American public, and most of the soldiers and Marines in Iraq understand the idiocy, the pointlessness and shoddy logic of this alter-ego "war" we are fighting in Iraq, Afghanistan, Somalia, soon Iran and perhaps even Syria. This majority of Americans are beginning to hate Dick Cheney and George W. Bush for what they are doing to our own nation. But the 70% in this country have no important conferences for the political leadership, they have no lobbyists, they have no deep pockets, and they have no rabidly confident sense that they alone have all the answers to the world's problems. AIPAC, on the other hand, has all these things.

And soon, it is likely they'll have their desired attacks on Iran. We may soon hear of an accident, an incursion, or a purported attack on our forces. That provocation will force the President to bomb until our bombs run out, and will give the Democrats one more opportunity to prove their abject fealty to war. From what we are hearing of this year's AIPAC conference, it will be up to a few honest and courageous souls in the Senate, or a revolt of the generals, to stop America's next war. "
Posted by Tony at 12:13 PM