So, What’s Iraq Actually About Now? 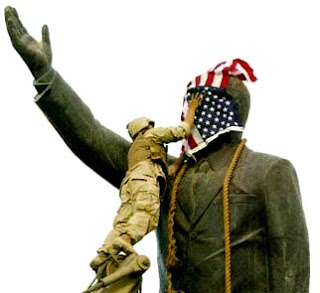 "Four years into the Iraq war — “hard to believe,” eh, Mr Wolfowitz? — don’t expect the U.S. media to dwell on the conceptual foundations of this catastrophe. That may be because the media was rather complicit in laying those foundations. But the more interesting question, today, I think, is where the Iraq adventure is going, because its narratives have clearly unraveled, and its strategic purpose — in the sense of attainable goals rather than fantasies — is now far from clear. To be sure, today, Washington is clear only on what it wants to prevent in Iraq, and even then its chances of doing so are slim. Still, as Bush says, that doesn’t mean it can withdraw.

It’s worth noting, in passing, that the decision making structures in the United States are fundamentally dysfunctional to its imperial project — its system of government is democratic (in a plutocratic sort of way), and distributes its flow of information and decision making across a number of bureaucratic command centers that are seldom on quite the same page, and compete for authority and resources — a competition that occurs partly in the public eye, via “leaks” to the media, whose source is invariably the bureaucratic rivals of those who are made to look bad by the story. The executive decision makers are always vulnerable to the limited appetite of the electorate for costly imperial adventures, and the electorate gets to express its impatience every two years by using the ballot box to limit the authority of those directing the current imperial expedition.

The patience of the enemy out in the field, meanwhile, is invariably far deeper than that allowed by U.S. election cycles. Ho Chi Minh knew that; so do the Iraqi insurgents and the Shiites and the Iranians, and the Palestinians and Syrians and everybody else Washington is fighting. The Iraqis are intimately aware of the debate in Washington over withdrawal, and they know that despite the surge of troops, the U.S. will in the near future be forced by domestic pressure to withdraw most of its infantry from Iraqi streets. (No wonder frustrated hawks like Max Boot and Michael O’Hanlon are suggesting that the U.S. military begin outsourcing expeditionary warfare to the satrapies, offering green cards for four years service — just as the British wherever possible sent Indians or Ghurkas to do their fighting.) But even that won’t overcome the bureaucratic internecine warfare. Ask a question as simple as “How could the U.S. occupy Iraq without having a coherent plan?” and the answer is simple: There was a plan, but it was trashed because it had been developed in the State Department, whose personnel hadn’t drunk the Kool Aid of permanent revolution in the Middle East, and therefore couldn’t be trusted. While the neocons might have believed their fantasies about Iraq tranforming itself immediately into a willing and happy satrap of the U.S., the likes of Cheney and Rumsfeld had no inclination to back a long occupation. So, Paul Bremer was sent in without a clue, armed with some old manuals from the occupation of Germany in 1945 (no jokes!) and a civil administration recruited largely from the intern echelon of neocon think-tanks. (Again, no jokes!)....."
Posted by Tony at 8:09 AM