In Iraq, public anger is at last translating into unity 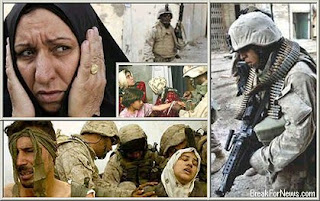 For four years, Britain and the US have aimed to encourage sectarianism, but ultimately they will fail to divide the country

"Two catastrophes have been in the making since President Bush and Tony Blair launched their war on Iraq four years ago. Both are epoch-making, and their resolution will shape regional and world politics for decades to come......

The success of the occupation's divide-and-rule tactics and their insistence on basing the new political and military structures on sects, religions, and ethnicities is threatening the communal cohesion that was once the country's hallmark. This is a factor in the absence of a united movement, capable of leading the struggle to end the occupation. The occupation has sown divisions where there were none and transformed existing differences into open warfare.

And is it any wonder that the long-suffering Iraqi people find themselves at an impasse. Try catching your breath after decades of brutal dictatorship, 13 years of economic sanctions and four years of an obscene war .

But even in the absence of a unified anti-occupation front, the resistance of the Iraqi people has managed to thwart the world's greatest military empire. And there are signs of a mass rejection of these sectarian forces, and the possibility that public anger will translate into the very unity that is so desperately needed. Rage against corruption and the collapse of public services is sweeping the country, including Kurdistan. Similarly, the proposed corporate occupation of Iraq, disguised as a legal document to tie the country to the oil companies for decades to come, has reminded the population of one of the main reasons for the US-led invasion. It has also reminded them what a self-respecting, sovereign Iraq looked like in 1961, when the government nationalised Iraq's lands for future oil production.

In an opinion poll released by the BBC yesterday, 86% of people are opposed to the division of Iraq. This and other polls also show majority support for armed resistance to the occupation. Four years into this terrible adventure, both the US and Britain must realise that it is time to pack up and leave."
Posted by Tony at 4:19 AM