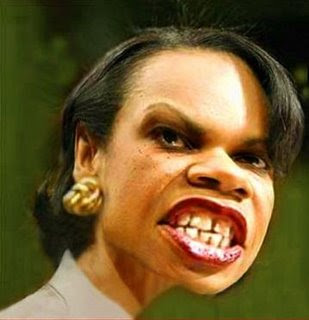 "Bethlehem - Ma'an - US secretary of state, Condoleezza Rice, stressed on Wednesday the need for Washington to continue its support for the political process in the occupied Palestinian territories. Rice was addressing the financial assistance committee in the House of Representatives. She said the Palestinians have to realize that their future is better when the so-called "moderates" are in power.

The Quartet, which comprises of the US, EU, UN and Russia, has stipulated that the Palestinian government recognises Israel's right to exist, renounces violence, and adopts the previous signed peace accords.

In another development, the Associated Press reported that Rice had announced that Washington would reduce aid to President Abbas' security forces.

She did not provide specifics, but a senior U.S. official said the cut would amount to about $36 million, leaving only $50 million of the original package intended for the Palestinian security forces, AP reported.

According to AP, Rice said the revisions would strengthen a ''firewall'' to keep money away from Hamas, who formed a national unity government with Fatah and other Palestinian political factions last week. Hamas is considered a terrorist organization by the USA. "
Posted by Tony at 12:48 PM