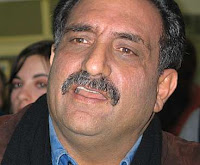 Israel is demanding the absurd, but the illusion is shattered if Arab states understand that the game of axis politics is not in their interest

"......It is difficult to say whether the Arabs recovered a margin of freedom because America messed up so drastically in Iraq and because they realised what a folly it was to heed Washington's orders once the Israeli army started to stumble so frantically over its shoelaces in Lebanon, or because, during the war in Lebanon in particular, they proved themselves no less hostile to the "extremists" in the region than the neo-cons, yet, at the same time, more realistic and certainly not as clouded by the dreams of spreading democracy and other facets of the ideological romanticism that governed the American neo-cons' view of Israel and its regional role. In all events, the result is the same: Washington has loosened the leash and Israel under Olmert is taking the so-called moderate Arabs more seriously than it did under Sharon.

Returning, therefore, to Olmert, why did he home in on Resolution 194, in particular, despite the fact that the Arab peace initiative -- regretfully -- does not explicitly mention the Palestinian right of return but rather confines itself to the formula of "a just peace in accordance with" this resolution? Why, too, did he not happen to remind us that he refuses to withdraw to pre- June 1967 borders, inclusive of Jerusalem? Certainly, he had made his position on this clear on earlier occasions, going so far as to accuse Ehud Barak of forsaking Jerusalem during Camp David II, even though Barak did nothing of the sort.

Firstly, Olmert likes to air his objections in instalments, so that he can wring out more concessions from the Arabs in a gradual way. Secondly, he didn't want to bring up the subject of withdrawal so as not to undermine the efforts of the "moderate Arab axis" before the Riyadh summit, especially since he knows that Saudi Arabia will not budge an inch on the question of borders and Jerusalem in particular. So, to spare the "moderates" any embarrassment, he confined his remarks to 194, because he rejects the Palestinian right of return on principle. But, supposing for the sake of argument, that the Arabs play along and openly or tacitly relinquish the right to return, would Israel then accept the Arab peace initiative? Of course not. And we should be wary of deluding ourselves into thinking it would. It would only be prepared to accept it as a basis for negotiations, which is to say that it would accept the principle of withdrawal and then haggle over the depth and phasing of the withdrawal and over final borders. In short, Israel will agree to no point whatsoever in the Arab peace initiative.

By accepting to consider this initiative, Israel hopes to transform it into a drawn out process of extracting compromises from the Arabs, just as it had turned its agreement to deal with the Palestine Liberation Organisation into a protracted process of forcing the Palestinians against the wall. In the past we could identify the major turning points in the downward slope of the Palestinian/Arab position with respect to Israel. Now it is difficult to discern even the nooks and crannies, so fluid and convoluted has this process of extraction become, what with all the play given to the "two sides" and "moderates and extremists on both sides", and with the endless biding of time until the Israeli elections are over, the next American elections, a new spate of envoys shuttling about the region, Palestinian elections triggering a blockade, another period of waiting to see how a people under occupation handled economic strangulation, and then whether or not they could form a national unity government and, if so, whether this might bring the end of the blockade or usher in yet another period of waiting......"
Posted by Tony at 9:04 PM