She Will be Back, Again. Expect Trouble ! 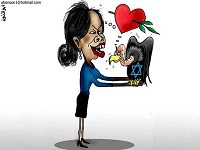 "Jerusalem – Ma'an – In a special interview with Ma'an, the United States Consulate Spokesperson spoke of the imminent visit of Condoleezza Rice to the Middle East.

"Secretary of State Condoleezza Rice will hold bilateral meetings with Israeli Prime Minister Ehud Olmert and Palestinian President Mohmoud Abbas. She will also meet with the foreign ministers of the Arab Quartet [Egypt, Saudi Arabia, United Arab Emirates and Jordan] and with Egyptian President Mubarak in Aswan and Jordanian King Abdullah II in Amman. While in the region, Secretary Rice will discuss the next steps in achieving a two-state solution to the Israeli-Palestinian conflict, as well as other regional issues of mutual interest."......."
Posted by Tony at 5:28 AM