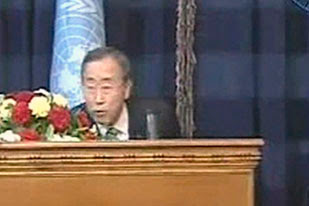 "The United Nations secretary-general has been shocked by a huge explosion in Baghdad's secure Green Zone during an unannounced visit to Iraq.

Ban Ki-Moon was unharmed when a suspected rocket landed outside the office of Nuri al-Maliki, the prime minister, during a joint news conference on Thursday.

Small pieces of debris could be seen falling from the ceiling above Ban before the two men resumed the news conference.

The UN chief was making his first visit to Iraq since since taking office in January, to discuss a five-year reconstruction plan for the country announced last week.

Shortly before the explosion, al-Maliki had said that Ban's visit was a sign that Iraq was on the road to stability.

"We consider it [the visit] a positive message to world in which you [Ban] confirm that Baghdad has returned to playing host to important world figures because it has made huge strides on the road toward stability," the prime minister said.

Ban had told reporters: "I'm confident that we'll be able to see, in the near future, a more prosperous and secure ... and a healthier future of the Iraqi people and government.".....
Posted by Tony at 7:28 AM