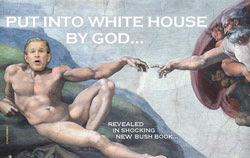 "Accounts of a Feb. 28 "literary luncheon" at the White House suggest that President George W. Bush's reading tastes – until now a remarkably good predictor of his policy views – are moving ever rightward, even apocalyptic, despite his administration's recent suggestions that it is more disposed to engage Washington's foes, even in the Middle East.

The luncheon, attended as well by Vice President Dick Cheney and a dozen hard-line neoconservatives, was held in honor of visiting British historian Andrew Roberts, whose latest work, A History of the English-Speaking Peoples Since 1900, Bush reportedly read late last year and subsequently sent to Prime Minister Tony Blair. Cheney took the book with him on his recent trip to Pakistan.

Roberts, an avowed Thatcherite who proudly declared himself "extremely right-wing" in a recent Financial Times interview, repeatedly advised the president, according to Irwin Stelzer, one of the neoconservative attendees, to ignore rising anti-U.S. sentiment abroad and opposition at home in pursuing his war on terrorism – or what the historian has called "the Manichean world-historical struggle" against fascism, of which "Totalitarian Islamic Terrorist Fascism" is only the latest.

A major lesson of history, Roberts told Bush, is that "will trumps wealth," according to Stelzer's account of the meeting in the Weekly Standard. He warned that "the steady drumbeat of media pessimism and television coverage are sapping the West's will" to fight and defeat the enemy which, in his view, includes Iran, as well as Sunni radicals, such as al-Qaeda......

In his article, Stelzer, an economist at the Hudson Institute and London Sunday Times columnist, disclosed that Bush had also recommended that his staff and friends read another, even more apocalyptic, analysis of the current war on terror, America Alone: The End of the World As We Know It, by Toronto-born neoconservative columnist Mark Steyn.

Steyn's book, which, unlike Roberts', actually made the New York Times bestseller list, sees Europe's demographic trends and its multicultural, "post-nationalist" secularism – of which his native Canada is also guilty – as leading inevitably to the "Eupocalypse," the "recolonization of Europe by Islam," the emergence of "Eurabia," and the onset of a "new Dark Ages" in which the United States will find it difficult to survive as the "lonely candle of liberty."......

All of these also play to Bush's own Manicheanism and self-image as a courageous, often lonely, leader in the mold of a Lincoln or Churchill, determined to pursue what he believes is right regardless of what "old Europe," "intellectuals," "elites," or even the electorate thinks about his course and confident only in the conviction that History or God will vindicate him.

It's an image that Bush's neoconservative guests – including the Wall Street Journal's editorial page editor, Paul Gigot; former Commentary editor Norman Podhoretz; New York Sun editor Seth Lipsky; and several like-minded columnists – themselves have also tried hard to propagate, particularly as public confidence in Bush has fallen to the longest sustained lows for any president in more than 50 years.

"It is fair to say that the few people I spoke with as we left shared my impression," wrote the Standard's Stelzer. "Here is a man comfortable in his own skin; whose religious faith guides him in his search for the good … who worries less about his 'legacy' than about his standing with the Almighty, [and] who is quite well read….""
Posted by Tony at 5:23 AM