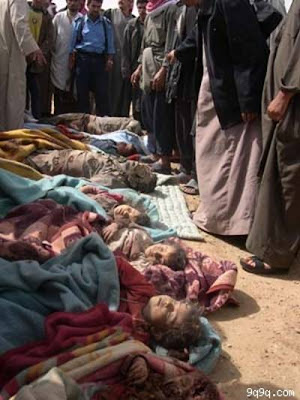 The world's worst refugee crisis, rampant unemployment and inflation, nonexistent infrastructure, malnutrition and hundreds of thousands of deaths. Wrong, this is not Darfur. It is Iraq after four years of US-led occupation, though Darfur, of course, gets all the billboards and celebrities.

"Here is a short rundown of some of what Bush's war and occupation has wrought.

Nowhere on Earth is there a worse refugee crisis than in Iraq today. According to the United Nations High Commissioner for Refugees, some 2 million Iraqis have fled their country and are now scattered across everywhere from Jordan, Syria, Turkey and Iran to London and Paris. (Almost none have made it to the United States, which has done nothing to address the refugee crisis it created.)

Another 1.9 million are estimated to be internally displaced persons, driven from their homes and neighborhoods by the US occupation and the vicious civil war it has sparked. Add those figures up - and they're getting worse by the day - and you have close to 16% of the Iraqi population uprooted. Add the dead to the displaced, and that figure rises to nearly one in five Iraqis. Let that sink in for a moment......

How would you know this? Well, if you lived in New York City, at least, you could hardly take a subway ride without seeing an ad that reads: "400,000 dead. Millions uniting to save Darfur." The New York Times has also regularly featured full-page ads describing the "genocide" in Darfur and calling for intervention there under "a chain of command allowing necessary and timely military action without approval from distant political or civilian personnel".

In those same years, according to the best estimate available, the British medical journal The Lancet's door-to-door study of Iraqi deaths, about 655,000 Iraqis had died in war, occupation, and civil strife between March 2003 and June 2006. (The study offers a low-end possible figure on deaths of 392,000 and a high-end figure of 943,000.) But you could travel coast to coast in the United States without seeing billboards, subway placards, full-page newspaper ads, or the like for the Iraqi dead. And you certainly won't see, as in the case of Darfur, celebrities on the American Broadcasting Co's weekday television program Good Morning America talking about their commitment to stopping "genocide" in Iraq.

Why is it that we are counting and thinking about the Sudanese dead as part of a high-profile, celebrity-driven campaign to "Save Darfur", yet Iraqi deaths still in effect go uncounted, and rarely seem to provoke moral outrage, let alone public campaigns to end the killing? And why are the numbers of killed in Darfur cited without any question, while the numbers of Iraqi dead, unless pitifully low-ball figures, are instantly challenged - or dismissed?......."
Posted by Tony at 7:44 AM