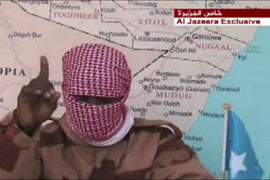 "The Somali Liberation Front, an otherwise unknown group, have called on Arabs and Muslims to come to Somalia to fight Ethiopian troops.

Speaking in a videotape aired by Al Jazeera on Wednesday, the group's spokesman also said that its fighters had begun a guerrilla campaign against the Somali government.

"We call on the Arab and Muslim countries to adhere to their responsibilities towards Somalis and to stand by their brethrens in their efforts to liberate their country," the Somali spokesman said, speaking halting Arabic with his face concealed.

The group's self-proclaimed spokesman also said that the African Union should not send troops to support the Ethiopian military which has deployed in Somalia to support the countrys' weak interim government.

"We call on the African countries to refrain from sending troops to Somalia, as by doing this they legalize the Ethiopian occupation, harm the Somali issue and get themselves involved in a dispensable trouble," he said.

Separately, the government of Belarus said that a privately-owned Belorussian cargo plane that crashed north of Mogadishu, the Somali capital, on Friday, had been shot down.

"The plane was shot down," Kseniya Perestoronina, a transport ministry spokeswoman said in Minsk, the Belorussian capital.

She said that the large Ilyushin-76 aircraft, in Somalia to assist struggling African peacekeepers, was hit at a height of 150 metres and that all eleven passengers and crew had died in the crash......"
Posted by Tony at 1:10 PM